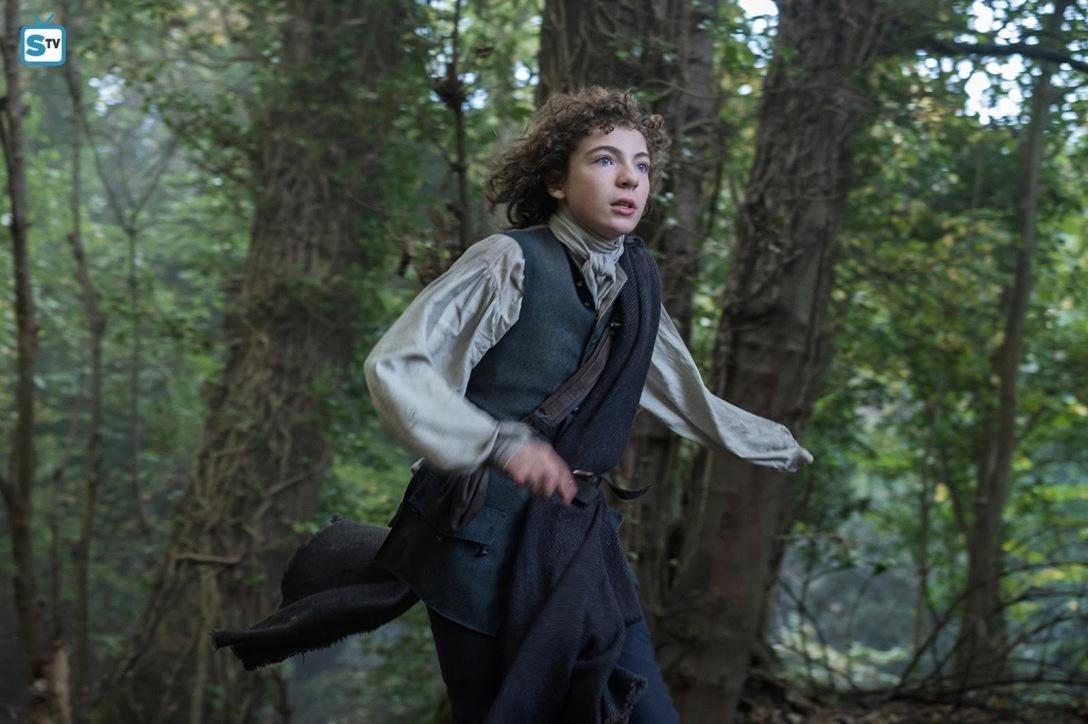 Welcome back! It finally feels like fall here in Northern California, which is prime weather (in my humble opinion) for obsessive television watching.

Elsewhere in Outlander news, if you’ve never read Tom and Lorenzo’s take on the costuming and fashion of Outlander it is well worth your time. They did deep analyses of the costuming of Mad Men and apply the same intelligent and observant lens to Outlander. It definitely has changed the way I watch television.

LOTS of surrendering in this episode. For the plotlines this week I think it’s easier to focus on Claire and then Jamie, rather than hop back and forth between centuries.

Surrender 1: If you can’t be with the one you love, love the one you’re with.

Both Claire and Frank are putting forth their best efforts in piecing this marriage and family together. Frank is portrayed as particularly vulnerable here; one thing I learned from reading Tom and Lorenzo is that a character in any state of undress is usually the weaker one in any sort of power dynamic. Claire really does hold all the emotional cards in this relationship.

Here they are also smiling through their teeth during dinner with the Nelsons. If you’re wondering who the Americans are in this scene they’re the ones drinking too much, speaking in colloquialisms, having inappropriate PDA, and putting their elbows on the table. And this seems almost like too much of a cliche for a show of this caliber. But this scene is obviously framed this way to depict a tale of two marriages: one that is open with its flaws but obviously still romantic (Nelsons) versus one that is beautiful on the outside but broken behind closed doors (Randalls). Again…almost too much of a cliche.

And this dinner scene is very different from the one depicted in the novel, which I really loved. In Voyager Claire is having an agonizingly long day with a cranky newborn Bree. She is expected to host dinner for Frank’s boss and his wife and, of course, her house is a mess, she is a mess, the guests show up early, and Frank snaps at her for not magically having everything perfect. And this portion of the novel felt very realistic and organic and I wish they had left it unchanged. If there’s one thing that Diane Gabaldon does very well it is write with a deep understanding of womanhood and motherhood. From pregnancy to post-partum to breastfeeding, she really speaks to her predominantly female audience with integrity.

Surrender 2: The end of a marriage

Frank quits the charade and vocalizes what they both know: Claire is still in love with Jamie and this marriage is broken. She can’t look at him when they make love and he knows her well enough to know that’s a problem. She’s angry and defensive while Frank is saddened and resigned.

This little pumpkin that they got to play baby Bree is seriously the cutest thing ever.

We know from Claire’s voiceover that she’s unfulfilled being a homemaker and so we flash forward to her first day of medical school.

These scenes hit a bit too close to home. I graduated from University of California, Davis’s School of Veterinary Medicine in 2010. Although my graduating class was predominantly female and veterinary medicine is now a female-dominated profession, a quick glance at the alumni photo walls shows that this was obviously not always the case. The school’s first graduating class in 1952 was, unsurprisingly, all male and all white. Their first woman graduated in 1953 and she was the only woman in her class. The next two female veterinarians didn’t graduate until 1959. The first African-American student graduated in 1967.

These demographics have definitely improved. The incoming fall class of 2021 admitted 147 students: 116 women and 37 men. Forty-three percent are non-white. So things are diversifying. BUT. Organized veterinary medicine is still predominantly male; only two of the nine members of the American Veterinary Medical Association’s leadership are female. And male veterinarians still out-earn female veterinarians (CMVA 2016 Economic Survey). AND I personally feel that obtaining a healthy work-life balance as a veterinarian and a mom is really, really tough (although that could be said of many professions). There is still a ton of work to do toward equality, even in the face of improving gender and racial shifts.

SO, my point: Claire is a rockstar and super brave for being the lone female student in her class.

Surrender 4: In the words of Roy Orbison, It’s Over.

This was a neat piece of camera trickery where Claire and Frank both appear happy as they settle in for the night but, lo and behold, they are now sleeping in separate beds. Their mention of Bree here tells us she’s their sole connection now. And, as I opined in my last post, Frank comes off as a far more sympathetic character in the series than he does in the novel, which I think adds some interesting complexity to the story.

So maybe street bagpipe players are more of a thing on the East Coast? I’d love to know if anyone has ever seen one? I never have in California but I feel like they would be a welcome addition to my downtown. In any case, there is no nuance here. Claire misses Scotland and, more specifically, one fine example of Scottish Highlander. Which brings us to…

For the sake of brevity, the series informs us in a much more timely fashion than the novel that Jamie has been hiding in a cave for the past six years and is known as the Dunbonnet (translation: dull brown bonnet) to the Redcoats who are searching for him. This is…not the best look for Sam Heughan, although he does an amazing job giving Crazy Eyes. Also, his hair seems more red than it did last season? Perhaps they are trying to really play up his “Red Jaime” notoriety but I feel like Sam Heughan’s hair color has always been a more auburn-ish brown. Anyway, I think if I were Jaime I would maybe keep my hair and beard trimmed more frequently if an army was looking for me based on this one physical attribute. Surely he can take a razor or knife back to the cave for such purposes?

Clearly Jamie survived Culloden but the pieces were put back a bit differently. He is quiet and foreboding and his loneliness is palpable.

By way of exposition we know that the Redcoats have been relentlessly searching for Jamie and have repeatedly arrested Ian, who appears slightly amused by their efforts. Less amused is a very pregnant Jenny Murray. Here we are also introduced to older versions of Young Jamie, Rabbie MacNab, and Fergus. The cutie who plays Fergus is a young French actor named Romann Berrux and at first I wasn’t sure it was the same actor from Season 2 (it is). He seemed to be doing something strange with his accent in his opening lines in this episode- almost infusing a Scottish lilt into his French accent? Which would maybe be expected for this character after living in the Highlands for the past six years? In any case he seemed reassuredly French further on in the episode.

It seems that teenagers find ways to get in trouble no matter the century. Here they uncover a gun hidden after the 1746 Act of Proscription and use it to kill a raven bearing a bad-omen. Of course Corporal Scottish MacTraitor and the other British officers hear the gunfire and search Lallybroch for the weapon and for Jamie. For a few tense minutes we watch Jamie hide while holding Jenny’s newborn baby Ian, who is on the verge of crying and giving the whole jig up. Jenny gently pesters Jaime into considering another marriage but Jamie is having none of it.

The British officers stake out Lallybroch and Fergus, in a fit of mischief and rebellion, lures them in the woods. Adult men wearing boots and bright red coats– stealthy they are not. Fergus taunts the officers and the damage to their egos results in his dismemberment. This scene was brutally realistic. If you’re curious how they did the FX for this scene you can read about it here.

Anyone who’s seen a movie in the last 80 years know that a woman barbering a man is code for foreplay. Mary MacNab, who is generally awesome in this episode, makes Sam Heughan dreamy again and also provides some warm-bodied comfort. In parallel to Claire, Jamie also closes his eyes. But he rather touchingly and convincingly lies to Mary and tells her she’s pretty but he always kisses with his eyes shut (very sweet and sad and not true). Also, this cave is amazing and comes with handy notches in the wall in which to set romantic votive candles.

Fergus reminds Jamie that life is worth fighting for and, as Jamie points out, his current situation is no better than prison. Jamie and Jenny and Ian arrange to have Jaime captured in order to collect the reward money. Lots of emotions, anger, and double-meaning in this scene. And Jamie looks…almost relieved? Certainly a weight has been lifted.