How ‘bout that trailer, huh? What a nice surprise that was for us on Monday…a little sip to quench our Droughtlander thirst.

I hope this will be an open dialogue, meaning if you think I’m way off I want you to let me know and give me your input. All of this is MAJOR speculation and nothing more.

So, shall we dive in? Warning: TONS of spoilers ahead…from Drums of Autumn and all the novels. Read at your own risk!

Also: major thanks to Outlander Online for all the screengrabs. They are awesome!

Okay, I will jump on the bandwagon and agree that Jamie’s hair (wig) is…less than ideal. I’m not sure why the late 80s crimped bangs were the choice here, but I won’t hold it against anyone. They are adorable and I otherwise give these two all the emoji heart eyes.

The song used in the trailer is Higher Ground by the artist Seventh Sense (feat. Renae). I love it almost to the point of obsession. It’s a great song to use— higher ground can refer, of course, to Fraser’s Ridge. Metaphorically it can also allude to escaping danger, something which all the main characters will be attempting this season. 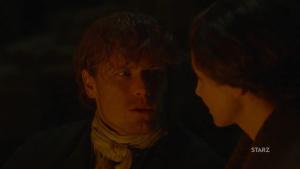 Maybe in North Carolina we can finally have peace and settle down and have hot sex without political rebellions and complications of time travel getting in the way? 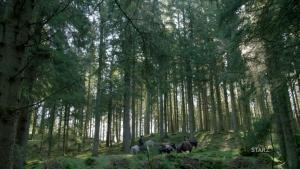 But as far as Scotland standing in for North Carolina, this all looks fairly believable. Believable enough, anyway, with the dense woods and mountains of appropriate elevation. I’ve seen much worse (looking at you, Cold Mountain). 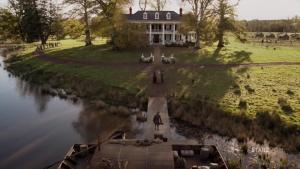 River Run! It looks great! Outlander Locations cites Abercairny Estates in Crieff as the filming location for Jacosta’s plantation; it appears a bit of CGI was used for the house and the surrounding landscape. 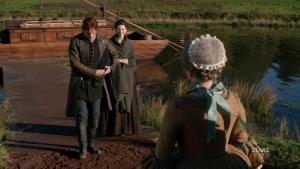 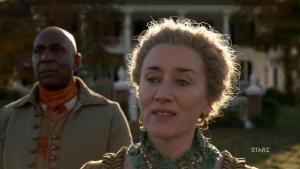 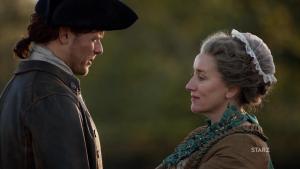 And here is Maria Doyle Kennedy as Aunt Jacosta and she looks FABULOUS. Totally believable sister of Colum and Dougal and her facial structure with those strong cheekbones make her a plausible relative of Sam Heughan and Sophie Skelton. Her somewhat stoic expression in this brief glimpse is likely due to her blindness.

Colin McFarlane as Ulysses also looks great. Love his splash of orange. An interesting note of bright color with a master who is blind. 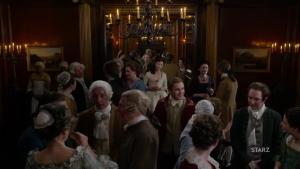 I’m assuming this is the dinner party Jacosta throws for Jamie and Claire. Will we or will we not see an impromptu inguinal hernia repair? I’m actually okay if that scene is omitted altogether, but I know a lot of people love it. 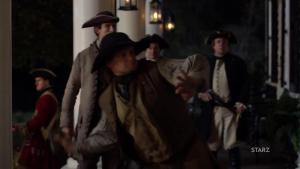 Readers, this has me a bit perplexed. This appears to be an angry mob descending upon River Run…and there’s not really anything like that in Drums of Autumn? I had to brainstorm this one with my sister, so here are some thoughts:

This could be the mill scene, where a slave has been impaled and hung on the crane by the overseer and chaos ensues. This looks like the main house, though, and not the mill. It’s possible that production, either for monetary or logistical reasons or both, couldn’t build a whole set just for that scene; maybe they’ve reworked the scene to something different.

OR. It could be a scene from one of the later novels that they’ve fit into Season 4. The people in this scene appear to be mostly white, so I’m less likely to think it is a conflict dealing with River Run’s slaves. Possibly they’ve moved up the slave death/impromptu autopsy/interruption by Stephen Bonnet/fire/attempted stealing of Jacobite gold scene from The Fiery Cross.

OR…it could just be something entirely new. I welcome your input on this because, frankly, I’m a bit stumped.

This is Jamie very dramatically dropping his knife. Really, this could be anything but the point is it seems very significant and he looks quite handsome doing it.

So…is he dropping his weapon in front of someone so as to show he means no harm? Is he marking or declaring ownership of the Fraser’s Ridge property? Is he just extraordinarily clumsy? Time will tell.

Interestingly, superstition says that when you drop a knife and it sticks in the ground it foretells the visit of a friend who is a man. Lord John? Roger? MURTAGH???

Jamie’s bangs look much better when he’s holding fire and his shirt is half open.

If you look closely, you’ll see someone appears to be pointing a rifle at Jamie in the background. Possibly their visit up to rescue Roger? Possibly one of the aforementioned mob scenes? I’m also curious to see if they’ve moved up the fire of the Big House to this season (originally in A Breath of Snow and Ashes). It might make sense? They’ve obviously introduced the Ottertooth plot line (see below) and the fire is the whole impetus for Brianna’s time-hop journey, so it’s possible they’ll wedge it in to Season 4 just to neatly tie things up. These screen grabs from the trailer also look suspiciously like the Wendigo Donner and gang attack that precedes the house fire: 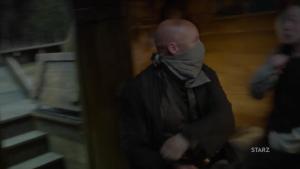 The actor in that bottom photo is maybe Flint Eagle. We know from his Instagram that he filmed a few scenes for Season 4.

Edited to add: A lot of people have pointed out these scenes could be from the river boat attack, which I think is very likely. 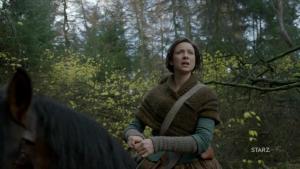 This is Claire looking very worried and searching for someone or something. Also, really, could be anything; I feel like Claire’s default mood is Worry. But I’m thinking this is when she gets lost after coming home alone from the Muellers; that scene was set in the late summer and everything looks fairly green here. It could also be the scene where she sets out to find Jamie after he throws out his back, but that was set in the winter and this doesn’t seem very wintery to me.

I suspect this shot of Claire in the rain is also this scene:

Production has been known to change timeline and seasons, though (thinking of pretty much all of Season 1), so anything is possible. 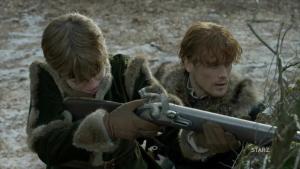 I’m pretty confident that’s Jamie teaching young Willie how to shoot; the actor appears child-sized so I’m thinking this is when Jamie takes Willie away from the Ridge to keep him safe from the measles outbreak.

Some have speculated this could be Young Ian, but he appears too small to be Ian and I would assume shooting would be something Ian knows how to do at this point.

This is likely from the first few chapters of Drums of Autumn. Jamie and Claire are burying Gavin Hayes (a hanged acquaintance) in the dark of night (no money for a proper burial) and Stephen Bonnet (having escaped the noose himself) stows away in their wagon. At this point in the story we don’t yet suspect Bonnet is our villain.

And there’s Hayes up on the gallows with Jamie in the crowd, a scene that obviously precedes the clandestine burial. At least I’m pretty sure that’s Hayes- the image is fuzzy but I think it is actor James Allenby-Kirk.

Question: did we know that this Hayes from Ardsmuir and Season 3 was the same as Gavin Hayes from Drums of Autumn? I never put that together.

Here is Stephen Bonnet again, looking quite handsome and dangerously charming. This appears ocean-adjacent and Bonnet appears well-dressed, so I’m guessing this is maybe before Roger sails to the colonies with Bonnet as the ship’s captain. Not sure if that fabric around his neck could be a pulled-down face mask, so it is possibly the scene in which Bonnet pirates their river vessel.

More Bonnet, and Jamie is roughing him up a bit? This could also be when Bonnet pirates their river vessel. Although, I don’t recall Jamie ever really having the upper hand in that scene and this seems like it’s on land (trees in the background). It’s possible they’ve worked in a vengeful encounter between Jamie and Bonnet into the season.

The Ottertooth storyline, in which Claire learns of others who purposely time-traveled to warn Native Americans about their eventual cultural demise. I loved this storyline and I’m so happy to see it here.

(Edited for correction: not a mule! Perhaps Clarence has been reincarnated as a horse for Season 4)

In which Claire discovers the dancers at the standing stones? As she is wont to do? This could be anything. That appears to be her blouse from last season. 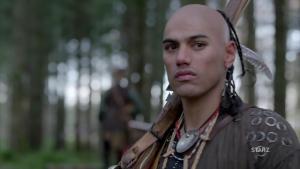 This appears to be someone from the Mohawk tribe, and all looks historically appropriate here I think:

I’m going to need an actor credit for that gentleman because he is very handsome, indeed. 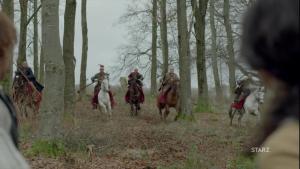 I can’t tell too many details from this screen grab. The men appear to be wearing red leggings, which may be consistent with Mohawk dress. Someone more knowledgeable than me can weigh in on that.

This is Craigh na Dun with a paved road behind it; I’m guessing this is Brianna. 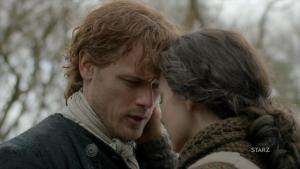 This all is pretty self-explanatory.

Maybe: the scene where she’s left alone with LJG and Ian to nurse them through measles and they get unexpected visitors. 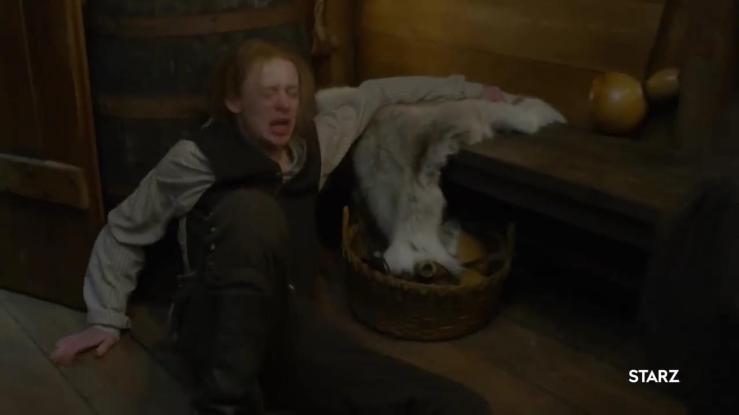 Here, unfortunately, the dishes suffer. As does Ian. Again, this could be any of the angry mob scenes I’ve speculated on previously. But this appears to be up on the Ridge.

I see modern clothes and car headlights in the background. I think this is the 1960s Gathering Brianna and Roger attend.

“I trust you with all my heart.” Kissing! Yay!

So how did we do? What did I miss? Let’s watch it again:

I’ll tell you what STARZ notably missed, and that is any significant presence of Roger and Brianna in that trailer. All I can say is that they better get their own trailer of equal length before November. There are plenty of scenes they can show without too many spoilers. No excuses! I’ll leave you with this to tide you over: