That was pretty darn close to perfect. Let’s discuss.

Warning- Contains spoilers from Outlander Episode 409: The Birds and the Bees. Stories of time travel, I’d argue, are enduringly and universally appealing because of what they offer: a chance for redemption. Either on a global level (preventing wars, averting tragedies), or an individual one…we live vicariously through their protagonists for a chance to make things right. A chance to do-over the mistakes we’ve made– those foolish regrets. A chance to rectify poor decisions and their consequences, often originally made with the best of intentions.

Ultimately that’s what we have in this climactic episode: the cumulative consequences of decisions (good and bad but usually honorable) made by our characters. Jamie aiding Stephen Bonnet, leading to a series of bad fortune. Characters keeping secrets from each other in an effort to spare their feelings or prevent further harm. Lizzie falsely identifying Roger because she believes him to be a rapist. They are all mistakes rooted in decent motive.

“I’m sure he was only trying to do the right thing,” Brianna tells Ian of Jamie. Like Jamie, all our characters error despite their good intentions. Like the Wilmington printer smudging the date, they all make “unforgivable mistakes.” The problem is they don’t know they’re making them. But, then, when do we ever?

This episode stuck very closely to the source material, and so most of the action this hour fits more broadly into the overall themes of Drums of Autumn and Season 4– communication, identity, and family. But the structure of the episode itself– as a smaller chapter within a larger story– ties in nicely to what it’s trying to accomplish thematically. That is, this episode asks us to examine the bigger pictures. How do the mistakes of individuals affect the larger unit? How do small decisions have enormous consequences? How do the actions of one person affect the fates of many others?

Expectations for this episode were exceptionally high, and it is my personal opinion that those expectations were more than met. A strong script, exquisite acting, and the usual excellence of costume and production design culminated in one of the best episodes of the entire series. It will stay with me for some time, and book readers know that the remaining four episodes of this season hinge almost entirely upon the stories established in this hour. Let’s take a closer look.

We begin right where we left off last week, with Brianna limping home- physically and emotionally bruised- following the rape. Brianna’s shock and pain are too familiar for so many women and disturbingly timeless in their relevance. While we are on the subject, I think a huge collective regret we have as a society is the way we treat victims of sexual and domestic assault. Let’s do better.

Roger and Brianna both make attempts to seek the other out the following day but to no avail. Stephen Bonnet threatens Roger back onto the Gloriana, set for Philadelphia. Brianna wakes too late the following day to catch him in time and mistakingly believes he has left for good. Pride and heartache make regretful fools of us all.

Lizzie comes blazing through the muddy streets of Wilmington, eager to deliver the gossip that some craaaaaazy stuff went down at the theater the night before, namely that a lady hacked open some poor sap in front of everyone and performed a life-saving surgery. Brianna knows there’s only one woman around these parts with the guts (pun intended) to do such a thing and that would be her Mama. What’s even better is that Jamie Fraser is just yards away.

Sophie Skelton and Sam Heughan played the hell out of this scene. Watch how Sam Heughan’s face transforms from guarded wariness…

…to all-encompassing love and joy: Jamie effectively emotes the universal wonder parents have upon meeting their child for the first time…whether that child is seconds or years old. He has seen the photographs of Brianna, but to have her physically present in his arms is an altogether life-changing moment. Much like the difference between seeing the ultrasound photos and holding your newborn baby, the flood of love that comes with finally seeing your children is truly earth-shattering.

Brianna, for her part, collapses into his arms with the finality of the journey. I’ve admittedly already watched this scene at least a dozen times. It was just so, so good.

Brianna’s reunion with Claire was equally great. Caitriona Balfe more than earns her Golden Globe nomination in this episode with confusion giving way to shock and and then relief…there weren’t enough tissues in the house, my friends.

Once everyone calms down Brianna fills Jamie and Claire in on the reason she came…their impending deaths. Somewhat of a mood killer?

Again, Brianna telling them of the newspaper article has good intentions–perhaps there is a way Jamie and Claire could prevent the fire or circumvent what transpires. But, as Jamie somewhat dryly notes, they have yet to be successful in changing written history. If it can’t be prevented, is it right to tell them? Would you want to know the exact day of your death? Would it be a blessing or a curse?

Think of the way that knowledge affected Blackjack Randall- Claire deliberately told him the date of his death and her intent in doing so was far from benevolent; she knew that such knowledge would undoubtedly haunt him. Brianna has good intentions, but is it a mistake?

(Note: novel readers know how this all eventually works out but please do not comment with spoilers. Also, if you want a great novel to read that explores this subject I highly recommend The Immortalists by Chloe Benjamin)

I love Ian’s total nonchalance at meeting this heretofore unknown cousin. I don’t think he knows Claire and Brianna are from the future…that would be a huge cognitive leap. But, in the words of another esteemed time-traveler, he likely suspects strange things are afoot at the Circle-K.

Up the mountain they go! Murtagh is hanging out and keeping a low profile and presumably helping milk those poor neglected dairy goats. All scenes with Murtagh are such a joy simply because they are a surprise. He, too, is relatively chill with Brianna’s sudden appearance. With this family you learn to roll with it. Brianna’s time on the Ridge is a kaleidoscope of emotions, and Sophie Skelton does a fantastic job of pulling her character inward; she is constantly preoccupied with the memories of Wilmington. Jamie is cautiously affectionate, always watching her and never quite believing his eyes that she is really there.

There was some overt but nice parallelism drawn between Brianna and the bees, as both find themselves removed from their homes– lost but resigned. More than that, this scene is also quite moving in the way it also touches upon this episode’s themes of connection, mistakes, and regret. A bee colony is a large family unit, prone to collapse when its members leave…strong yet fragile and dependent upon communication. 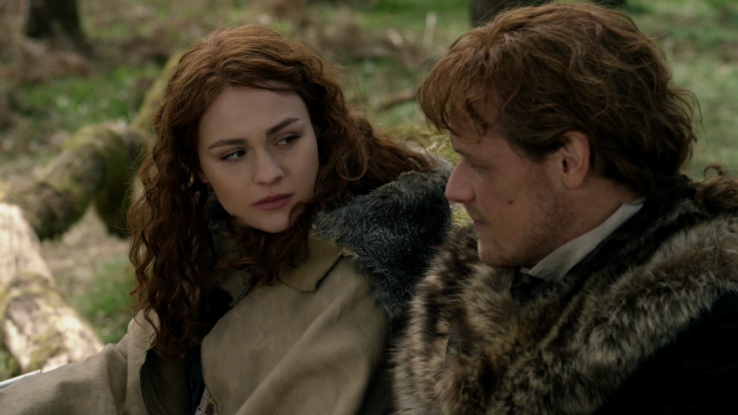 Jamie never saw sending a pregnant Claire back through the stones as a mistake– he really had little option. But the regret comes in all the years lost as a family. Jamie does not begrudge Frank or Claire or Brianna their happiness together, only the collective cumulative decisions and actions of many individuals that led to Culloden and the subsequent Fraser family separation.

They are together again but not yet whole. For Jamie and Claire the knowledge of their child’s mistreatment and pain is the ultimate in regret— a mistake they surely could not have prevented but one as parents for which they will always blame themselves. Whose fault is Roger’s ultimate fate? There was some social media chatter this past summer about who exactly is to blame for what transpires at the end of this episode. Is it Brianna’s fault for not telling everyone about Stephen Bonnet earlier? Is it Lizzie’s fault for jumping to conclusions (ditto for Jamie)? Is it Claire’s fault for keeping the truth from Jamie? Or did Roger seal his future when he walked away from Brianna that night?

You could argue that all of them or none of them are to blame. It’s the perfect storm of miscommunication and as a reader and watcher of these scenes I want to grab each of them by the shoulders and shake some sense into their fictional brains. Nearly every regrettable action in this hour is rooted in love or honor, but every decision has a butterfly effect…the road to hell is paved with good intentions, is it not? For what it’s worth, I think the person who is ultimately to blame is Stephen Bonnet; victims can never be blamed— the fault always lies with the original perpetrator.

January is named for the god Janus, who looked with his two faces into the past and ahead to the future…the original time-traveler. The writers likely did not know the air date of this episode when they sat down to write it, but it’s fitting that it fell at a time when we are all busy making resolutions. Regrets for our lives and resolve to do better…we approach the new year reflecting on our own unforgivable mistakes. Wherever those reflections take you, I wish my fellow fans and readers a Happy New Year.