Okay, my friends, shall we finally tackle Laoghaire?

Not literally, of course, although I know many of you would do so if given the chance. No, let’s examine Laoghaire for her character, her place in the Outlander canon, and why she matters.

Because she does matter. Love her (like few fans) or hate her (like most fans), Laoghaire (exquisitely played by Nell Hudson) is one of the most believable characters Diana Gabaldon created. We all know, or have known, women like Laoghaire— women who never mature, who never engage significantly in their community, and who carry their bitterness around to the detriment of others.

Readers have previously commented with disapproval whenever I express any sort of empathy for Laoghaire, so let me be clear: I do not think she has many redeeming qualities. She raised two intelligent and competent daughters, which maybe speaks well of her parenting, but otherwise I’m in agreement with most fans that she is not a great person. As with Geneva, however, we do not have to like Laoghaire but we should strive to understand her. By holding her in contrast with the other female Outlander characters we can see how clearly she is lacking— and how she is a cautionary tale of what not to become.

So, let’s aim to understand her just a bit. Our limited glimpses of her father suggest he’s probably a jerk, willing to have her beat for “inappropriate behavior”…which, I mean, show me an adolescent who hasn’t engaged in inappropriate behavior. She’s a teenager when she falls for Jamie and, given the way he heroically takes her beating and then participates in a tongue wrestle with her in the alcove, she’s not too off-base in assuming he cares for her (at least hormonally).

She waits for him to return from rent collecting, eagerly anticipating more alcove face-sucking action, only to be shocked by the news he has married a Sassenach. She’s married and widowed twice, and it’s suggested in the novels and the series that at least one of her husbands was abusive. She finally marries Jamie in middle age, only to find the marriage lacking and unsuccessful. And, to rub salt in the wound, Jamie’s first wife shows up after twenty years to take him back.

Wallowing in her own self-pity, Laoghaire never rises above any of these setbacks or challenges. Her world view is myopic, never really extending beyond how it relates to Jamie Fraser.

And that’s a dangerous position for any woman. We never individualize if we only ever define our worth as how it relates to a romantic partner. When we stop viewing women as friends, and instead view them as competition, our world gets very small indeed. With such a narrow focus we never mature and we never grow. We run the risk, as a brilliant man once opined, of being lassies when we are fifty.

My dad was an army pilot and he is fond of saying “Get your head out of the cockpit,” meaning if you don’t see the big picture- whether in flying or in life- you’re putting yourself in danger. And that’s Laoghaire’s problem- she let herself become too insular and never saw beyond her own short focus. She never saw her own life as anything beyond how it relates to Jamie. She never saw the big picture.

Part of that is her own inherent immaturity, some is likely attributed to the uncontrollable circumstances of her life. Regardless of the reasons, if we compare her to the other women of Outlander we can see how obviously she pales in terms of loyalty, friendship, and support of others. While Jenny takes in extra mouths to feed (despite short resources), and Claire never hesitates to help the sick or wounded, Laoghaire never extends herself beyond the minimum. In Drums of Autumn, as we may also see in Season 4, she is constantly asking for more— not because she needs more, but because she doesn’t want others to have what she cannot. That doesn’t make Laoghaire very admirable, but it certainly makes her very human— and realistic. How often are women fed this false narrative- by movies, the media, politicians, CEO’s, etc- that there are limited positions for us? There is only one good man, only one spot at the corporate table, and room for only one woman at the top. All too often we are led to believe that there is only one way to achieve anything, and that is to fight other women for it. It’s a common myth into which we buy, but examination of our own experiences reveals that women are strongest when we support each other. Think of the times in your life when you have needed others— a meal train after a new baby, a potluck during a wake, a neighbor to help watch the kids during an emergency— chances are those lending hands belonged to women. 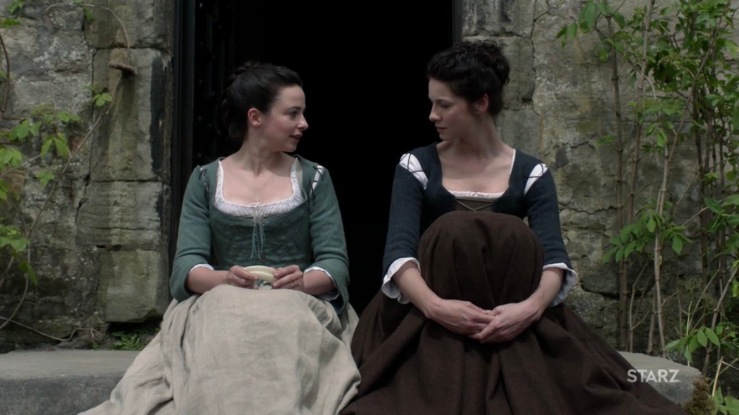 There is a passage in Written In My Own Heart’s Blood that I find particularly moving for its accuracy. For non-novel readers I will leave out some details to avoid spoilers (I ask that you please do the same), but in this scene the characters have gathered for the funeral of a child:

“The women clustered…hugging and weeping, then gathering in small clumps with their friends, drifting back to the tables to rearrange things or put out more bread or cakes.”

Women, as clichéd as it sounds, knit the fabric of community. 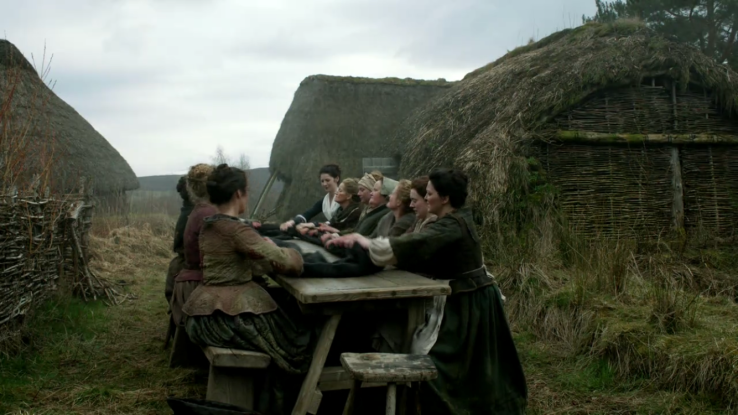 We, as women, have to support each other; if we don’t there is no substitute. We have to believe women when they tell us they’ve been abused, because the chances are extremely high they are telling the truth. We have to support the decisions we make as women. We need to show up for women who decide to have children, but we cannot criticize women who decide to pursue careers; we also cannot judge women who choose or have to do both. We need be present with listening hearts for all women- marginalized women, women with whom we disagree politically, and even for women we will never meet. It is the only way we will ever achieve anything; this world is hard enough without us being hard on each other.

Perhaps Diana Gabaldon will redeem Laoghaire in some meaningful way before the series completion— we’ve already seen some glimpses of it in An Echo in the Bone, when Laoghaire seeks help from Claire with some degree of humility (again, no spoilers please). Regardless of her eventual fate, Laoghaire is a lesson in the power and destruction of toxic jealousy. So, with that message in mind, I implore my fellow women to encourage and sustain each other. Listen, empathize, help, and empower. The community and equality we can build together is a beautiful thing, but we will never achieve anything if we show up waving our proverbial weapons.

14 thoughts on “Why Laoghaire Matters”