Welcome back! Please, come in. Pull up a chair, sit back, and tell me about your childhood. Let’s take a psychoanalytical deep dive into this week’s episode.

Warning- Contains spoilers from Outlander Episode 411: If Not For Hope

Strange, the things you remember.

While this episode focuses overtly and obviously on the concept of hope, more subtly it explores the psychological reasoning and various motives behind hoping. Moreover, this episode returns to a common and recurring theme in Outlander: how reliable we are with our own history. As Jamie observes, there are two sides to every story and we tend to remember only one– our own. how accurate are our memories? How does our psychology cloud the facts of the mind? As noted in this hour, it’s sometimes hard to separate fact from fiction.

And that’s pretty much the nature of psychoanalysis, is it not? Exploring our psyche and patching together what is real versus what is imagined, what we learn versus what is instinctual, and what we remember versus what we repress. People disappear all the time…just like memories. Most are found, eventually. It’s powerful stuff, and a person’s desire to engage is psychoanalysis is fairly timeless. People love learning about themselves, just ask Brianna…or any creator of those Facebook personality quizzes on which we so eagerly click. What City is Meant for You? Who Were You in a Past Life? Who is the person with you in that forest? Lord John visualizes Jamie and Brianna, we can assume, pictures Roger or Claire…all characters existing in this episode in forests imagined and real. All of them work through some tough psychological stuff and eventually gain perspective and clarity…eventually seeing the forest for the trees, if you will. 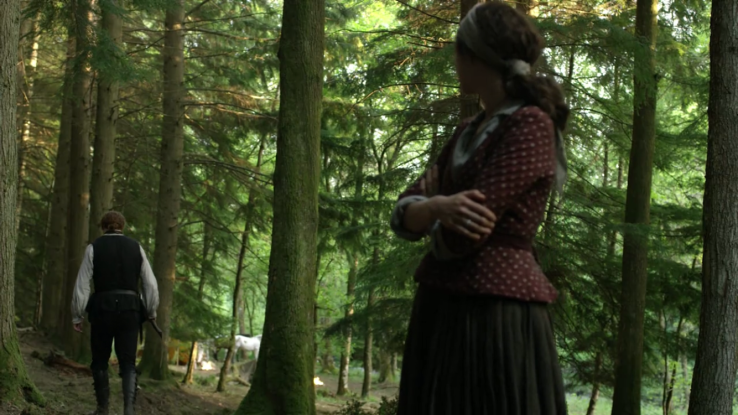 For the most part everyone operates alone at the start of this hour; consumed by worry and wracked with guilt, they all choose keep to themselves. By the end we see them “finding comfort in the company of others,” with relationships on the road to repair. Like a good therapy session, they unburden themselves to each other. Only Roger remains truly alone, and yet we find him just as hopeful– finding the will to stand up, undoubtedly fighting the urge to give up in the face of a seemingly hopeless situation. Roger once asked Claire how to go on living during times of grief and hopelessness. We do it, she answered, because that’s what our loved ones would want for us. And perhaps that’s why we find him at the start and end of this episode still putting faith in Brianna. He chooses to go on, because that’s really the only thing he can do.

Whether Roger chose not to go back through the stones or if he was pulled back at the last minute (à la Claire in Both Sides Now) is not answered in this episode, but I have a feeling we will see it explained eventually. Regardless, the cold open (hot open? that shower looked deliciously steamy) immediately thematically ties in to the concepts of real versus imagined and separating fact from fiction. It was a fairly effective psych-out, pun totally intended.

Lizzie also immediately jumps right into the psychoanalysis theme and, upon her first encounter with modern art, worries that Brianna is losing her shit. It’s important to note that Freudian theory influenced much of the art of the twentieth century, most notably in the Surrealism movement.

Brianna has the very weary look one adopts when dealing with someone who has apologized one too many times. She forgives Lizzie, if only to make her STOP TALKING ABOUT IT.

Look at this costume! Jocasta seems almost Elizabethan, which is maybe intentional– a wealthy woman, powerful but alone. Jocasta, despite her wealth (or maybe because of it), is isolated. She’s famous for her dinner parties, but the parties likely exist because she has no one else to talk to.

Jocasta is pessimistically pragmatic, offering up advice that is in complete contradiction to Lord John’s later monologue on romance and hope. Jocasta knows that an unmarried, pregnant woman in this century has a difficult path ahead of her; a child born out of wedlock would fare even worse. Thus, she arranges a dinner party of eligible bachelors…much to Brianna’s dismay but our immense entertainment.

This dinner party was great, wasn’t it? I loved the looks of resignation that befall everyone’s faces when Lord John arrives. Honestly, it’s game over whenever David Berry enters any room. Still, Forbes and Wolff do their best. If not for hope, eh Gentlemen?

Notable to the “two sides of every story” theme is the presence of Judge Alderdyce, a man used to hearing, well, two sides to every story. He and LJG exchange Looks during dinner, and Grey is immediately and noticeably sympathetic to Brianna’s psychoanalytic interpretation of Alderdyce’s answers. An empathy is which obviously explained later, as Brianna stumbles upon them in flagrante (and symbolically in a closet of sorts) when she wanders downstairs for a pregnant lady midnight snack. Don’t mind me, just looking for the pickles! In Wilmington, Murtagh is on the hunt for Stephen Bonnet while evading recognition and capture by the Redcoats. He’s also hiding out in Chez Farsali, much to Marsali’s growing annoyance. Marsali, for her part, proves she understands the psychology of her man. In a conversation taken from Dragonfly in Amber, in which Jenny asks the same thing of Jamie for Ian, Marsali implores Murtagh to ask Fergus to fight for the Regulators. She knows that Fergus needs to feel needed.

From Dragonfly in Amber:

“’Aye, he is,’ she said softly. ‘But that’s because he’s a whole man to me, and always will be.’ She looked directly at her brother. ‘But if he thinks he’s of no use to you, he wilna be whole to himself. And that’s why I’ll have ye take him…’

…The strokes of the masher were slower now, without the fierce velocity of her earlier movements, but her voice held all the conviction of her slow, inexorable mashing.

Marsali, if you hadn’t noticed, is Jenny 2.0: married to a handicapped man, future mother of a relatively large family (minor spoiler, sorry), and a strong, straightforward attitude. Both of them are frighteningly in tune with the psyches of others.

Murtagh hunts down Bonnet and coldcocks him, but is captured by soldiers as he attempts to make away with Bonnet’s unconscious body. He punches Fergus to psych the soldiers out (see what I did there?), thereby allowing Fergus to escape. Again, we’re tying into themes of fact versus fiction and reality versus perception.

Psst, Fergus, Lord John is in town and he has a pretty good track record of getting Frasers off the hook. Which is exactly what he’s doing, actually, back at River Run. Brianna attempts to blackmail Lord John into an engagement, which (unsurprisingly) does not go over well. But John, understanding Brianna’s predicament and having faith and love for Jamie, eventually agrees to the charade. As with everything else in this episode, with this engagement it’s difficult to tell fact from fiction.

Lord John and Brianna’s porch scene was very touching and one of the best written of the series to date. There is some irony, perhaps unintentional, in having such a poignant discussion about hope while slaves work in the background. Sadly, for some groups of people, hope is limited at best. Oh yeah, Claire and Jamie were in this episode, too!

Cue the banjos and creepy kids…things are a bit tense in the Appalachian wilderness. Ian decides to play the role of therapist as he tries to mediate the schism between Jamie and Claire. He does not yet have the life experience to know that married couples very often work these things out on their own, without the awkward meddling of their nephew. Still, it shows how much Ian loves these two people– their happiness is important to him.

Later, after burying a man whose hope finally ran out, Claire and Jamie unload their worries in a good therapy session. As is usually the case, it is often our own feelings of guilt and fear that result in communication breakdowns. Having a child changes the dynamic of any relationship– Jamie and Claire are only fully realizing that twenty-three years later than most. There are two sides to every story, and now they are closer to understanding both.

And we end right where we began: with Roger. He figuratively and literally takes hit after hit, only to rise again. What gets him back on his feet? You guessed it. Hope.

Hope and psychology cannot be separated. Hope exists only if we choose to believe in a future that is worthy. Jamie observes that they’ve “lived with the fear of the unknown before.” But, really, that’s all we ever do. Each day brings the unknown, for better or for worse. We rely on hope to see us through it. 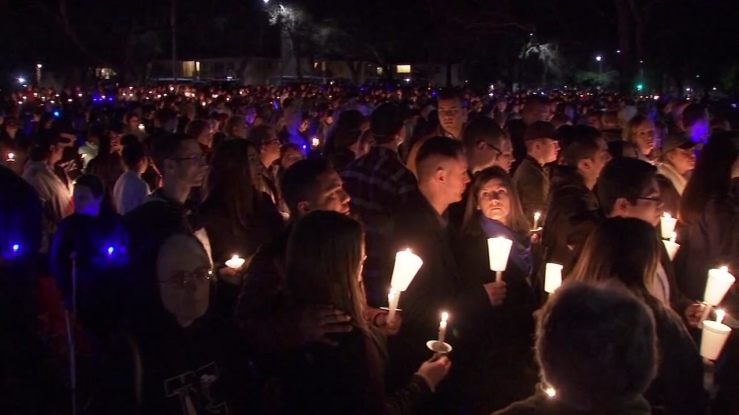 A few days ago, my own community was shattered when Natalie Corona, a 22 year-old police officer, was ambushed and fatally shot while responding to an otherwise routine traffic call. She was sworn in only five months ago; her father, a retired officer himself, was the one who pinned her badge.

So this episode was, sadly, very timely for me. Hope is why we tell our children that yesterday was scary but today will be better. It’s how we live amid the fear of the unknown. Like our characters this hour, we take comfort in the company of our fellow human beings. We get back up when we’ve been knocked down. We have faith in the redemption of love. We couldn’t otherwise go on…if not for hope.

Information for contributing to Natalie Corona’s memorial fund can be found here.