Delightfully creepy? Beautifully terrifying? I’m not sure how to characterize this episode except to say that it was enormously entertaining. Let’s discuss.

Warning- Contains spoilers from Outlander Episode 503: Free Will. Also, my readers know that I’m not especially religious but I do reference the Book of Genesis throughout this post. If that’s not your thing you can opt out now. Thanks in advance for reading. I’ve seen a few comments comparing this episode to Rent (Episode 105) and, indeed, the two are similar in their on-the-road feel. But I actually found far more similarities in this episode to Uncharted (Episode 311). From main characters who wander from their original course, to an isolated and strange home complete with unruly goats, both episodes dive deeply into the bizarre. In both episodes, what seems surreal is in the end attributed to basic human flaws: isolation, abuse, and abandonment. So let’s talk about human flaws. Specifically, the original human flaw. We cannot discuss an episode titled “Free Will,” without discussing man’s original sin. Because while our characters do indeed struggle with choice in this hour- whether or not to join a militia, whether to go or stay, whether to live or die- a deeper theme of this episode also addresses what happens to Adam and Eve after their expulsion from Eden: they find themselves displaced. Paradise is lost. 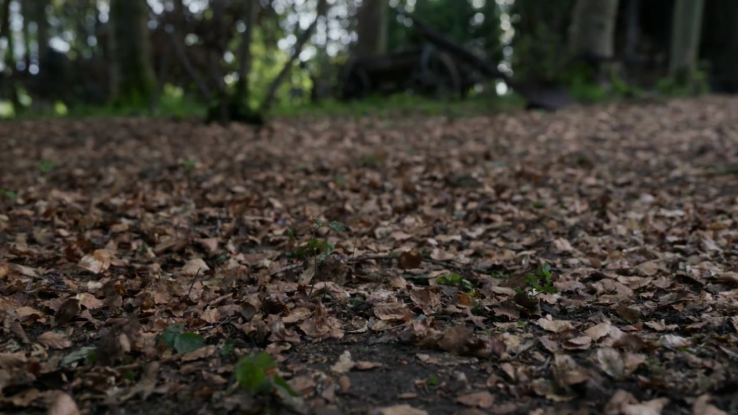 And so many things are displaced or misplaced or lost this hour. The bond papers are gone. The baby is left behind. The goats aren’t living in the barn. Keziah is missing his pants. Fanny was abducted from Baltimore. The passenger pigeons will eventually be lost forever. Penicillin belongs in the twentieth century, as do Roger and Brianna. Claire’s small mirror that she uses to examine Keziah is itself displaced, stolen from Father Fogden in an episode in which Claire herself was lost.

All of this contributes to an undercurrent of chaos this hour; the viewer and our characters are left feeling unsettled. Like the best horror films, the fear comes not from the supernatural but from very real human depravity…we dread we might suffer from another’s free will.

Claire tells Jamie he cannot be responsible for the actions of others, even as she feels enormous guilt over Roger and Brianna’s presence in the eighteenth century. But although we aren’t responsible for another person’s decisions, we are still frequently affected by their choices. Fanny and the Beardsley twins are victims of another man’s abuse. The baby is a victim of her mother’s abandonment. The passenger pigeons will eventually be victims of human wrongdoing. Like Adam and Eve introducing suffering to mankind, we often share in the consequences of another’s sin. 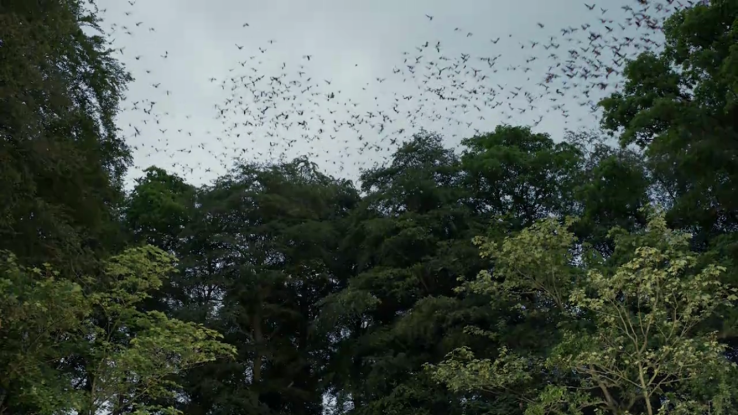 And so we make choices- we attempt to exert our own free will. And that’s where we find Claire at the start of the hour, attempting to create an antibiotic and change the fates of those around her. But Claire’s struggle to grow the right molds suggests that things perhaps exist best in their own time— when they are not so displaced. It’s the argument she later uses to try to convince Jamie that Roger and Brianna should go home.

I’ll note once again that Marsali is smart and capable and generally amazing. Her willingness to learn something so completely foreign shows she is a woman that is perhaps beyond her own time. It’s fun to imagine Marsali displaced into the modern world, PhD in one hand and a child’s hand in the other.

Jamie comes home later, reunites with Claire, and informs her he is ordered to gather a militia and report to Hillsborough. It is no surprise (nor is it contested) that Claire decides to accompany Jamie. However lost or displaced our characters find themselves, Jamie and Claire always belong together.

On the road, the men and Claire set up camp and Jamie gets the chance to inform Claire that Stephen Bonnet is still alive and causing trouble in the colony. And…this might have been good information to relay to someone back at Fraser’s Ridge? Especially with all the menfolk gone? But Jamie and Claire both seem to be in agreement that Bonnet’s presumed death likely gives Brianna some closure.

In the wee small hours of the night a young man is caught stealing and chased into the camp. Confusion erupts as he is initially thought to be Josiah Beardsley but then revealed to be his identical deaf twin, Keziah. Josiah explains that he and his brother were orphaned as infants and sold as indentured servants to an abusive man named Beardsley, a trader living nearby.

So Jamie and Claire decide to visit Mr. Beardsley in the hopes of buying the twins’ bond papers. Roger and the rest of the men head on to Brownsville and hope to recruit militia members along the way.

And here’s where the Deliverence portion of this episode begins, as the Beardsley homestead offers up the best of Appalachian horror. It is dark, disturbing, and dilapidated. There are goats inside the home, as well as one Mrs. Beardsley…a woman who clearly wants to be left alone.

Jamie presses on despite the foreboding environment. He and Claire enter the home, aghast at the smell and disarray. Did anyone else get the urge to swat imaginary flies buzzing around their own head during this episode?

Something clearly is amiss and Claire, being who she is, follows the smell and trail of bodily fluids upstairs and finds a near-corpse rotting on the floor. Talk about finding something not in its rightful place.

No story of Adam and Eve is complete without the devil, and here we have one in the form of Mr. Beardsley— a man who abused and killed four former wives, who starved and beat innocent children, and a man who is ultimately unapologetic about all of it.

Claire, bless her Hippocratic oath, sets to work cleaning his fetid bed sores, removing maggots, and tending to the man’s obviously abused body. Things go from crazy to deranged when Mrs. Beardsley goes into labor after attempting to murder Mr. Beardsley once and for all. 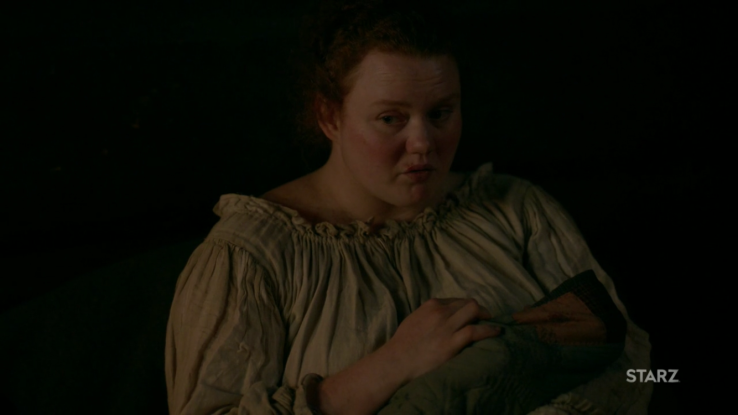 Unto the world a child is born. We learn that Mrs. Beardsley’s name is Fanny and that she was taken from her home in Baltimore and subsequently abused by her husband. She is haunted by the ghosts of the previous four Mrs. Beardsleys, claiming their spirits gather under the Rowan tree outside.

It’s interesting to note that in Norse mythology the first woman was said to be created from a Rowan tree— essentially, the story of Eve in another culture. In European mythology the tree is said to provide protection and ward off evil. Like the tree of knowledge in Eden, the Rowan tree in this episode reveals a truth about diabolism in this world. Here, the spirits of murdered women have fought with the devil and have a story to tell.

And so Jamie and Claire grapple (again) with the inherent evil in this world. The horror in this story comes not from the unknown but from the known. We have tasted the fruit of that tree of knowledge and suddenly, with enormous clarity, we see man’s wickedness.

Fanny disappears in the night, leaving behind the infant, the deed to the property, and the twins’ bond papers. Jamie and Claire struggle with the moral dilemma of what to do with Beardsley. Jamie offers Beardsley the opportunity for physical and spiritual mercy. Beardsley chooses the former but not the latter, refusing to seek forgiveness for his sins. It is the ultimate act of free will, choosing whether we seek salvation in the end.

Fanny worries that her child is born of her sin. And yet Genesis tells us we are all born from that original fall from Grace. God gave man free will, and we spend our lives dealing with the consequences of others’ actions. Poor men fight rich men’s wars. Wives can suffer at the hands of their husbands. Innocent children are abused by immoral adults. A species is permanently extinguished because of greed and ignorance. So much is lost and misplaced forever: trust, innocence, life. Jamie asks Claire in the end to make a promise that she will never let him suffer— that she will never try to save him when all hope is lost. But if we pay attention to the lessons of this episode then we know that’s a promise impossible to keep. We cannot be responsible for the actions of others— everyone is given their own free will. Like our characters, we are tempted, we glimpse the future, we choose knowledge, and we endure suffering. Paradise is lost. If we are lucky, we find it again.