Oh, readers, this was so good. Let’s discuss. As I remarked on Twitter, this episode felt like an hour of Outlander’s greatest hits, reminding us that when the material comes from the original source itself (or Herself) we are left with an episode that feels both authentic and intimate. I found myself vacillating between smiles and tears as I watched Journeycake…grinning with recognition when a particular scene unfolded, then collapsing into a blubbering mess with its emotional weight. But, truly, although most of the scenes from this episode were lifted from the novels, it never felt as if checkboxes were being ticked…the story never felt rote or predictable. Instead, the hour felt more like a homecoming— a return to the familiar. Which leads us to an overarching theme of this episode: nostalgia. The word nostalgia derives from the Greek words nostos, meaning “return home,” and algos, meaning “pain.” Combined, it defines what we all recognize as homesickness— a painful longing for what is gone, beyond our reach, or otherwise not immediately available.

Indeed, most of the story in this episode revolves around a family’s return home and its emotional fallout. Once the plan for the MacKenzies’ return is set in place, most every scene is laced with nostalgia. Thus our characters this hour grapple with that particular kind of pain, whether they are nostalgic for their own century, their own children, or their past lives. They recall memories that are at once joyful and aching…that unique combination of sentiment that only nostalgia creates. Remember our century? Remember our first home? Here are some drawings of our family. Here is a portrait of your son. Here is some peanut butter. Here are the things that trigger a nostalgic longing— things that make us remember a different time and place…things that remind of us home. Watching this episode itself feels like a homecoming, bittersweet and heavy with emotion….a similar poignant mix of happiness twinged with sorrow. Which is exactly what we want in a penultimate episode: an immersive experience that makes the events in next week’s finale feel emergent and personal.

Moreover, this episode asks if, having acted upon nostalgia, can we ever really go home again? Even if we journey back, is it ever really the same? Is our home as we remembered it? Are we the same people? Whether “home” is Fraser’s Ridge, a Mohawk village, the twentieth century, or Helwater, our characters are all forced to reconcile complicated homecomings. And so it is apt that this episode opens upon a home that is gone forever. The grim discovery that nearby homesteaders are the victims of arson is perhaps the trigger that provides a clear defense for the MacKenzie family’s return to the comparatively safe twentieth century. “Thou goest home this night to thy perpetual home,” Jamie prays as Roger ends a little girl’s suffering. The homecoming for this child is to the Lord. 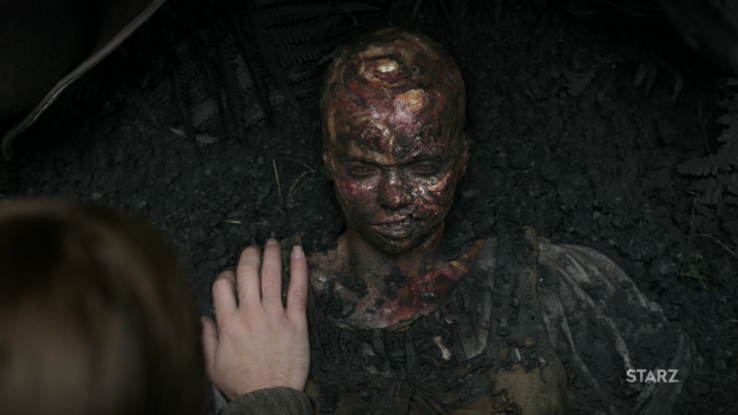 Back at the Ridge, Claire recalls the peanut butter and jelly sandwiches Brianna made for her before she journeyed back through the stones. Already our characters are engaging in nostalgia...I wanted you to have a taste of home, Brianna insists. But the reminiscing doesn’t last long. The Brown brothers and their men show up at the Fraser stead to recruit members for their “safety committee.” It’s clear to Jamie, however, that their vigilante motives are best avoided.

Did you see the sharp look Ian gives Wendigo Donner when he hears him speak? We recognize Donner’s accent as undeniably American, but to Ian his voice and words are jarring and suspicious. Combined with the opening tragedy and the scene that preceded this one (in which Otter Tooth’s opal explodes in Jemmy’s hands) the first half of this episode feels increasingly discomforting. As viewers we are being set up for an emotional tsunami. Ian senses it, too. Literally and figuratively, there is the smell of smoke in the air. And so Jamie and Claire come clean to Ian, the sight of Jamie closing the doors reminiscent of the best scenes from The Godfather. Ian is finally being let in on the family “business.” In a way, this is his homecoming. Meanwhile Ulysses is hiding nearby, unable to return to the only home he’s ever knows. He is a fugitive after killing Gerald Forbes in the last episode, and men like the Browns pose an imminent threat.

(Note: the book Jamie gives Ulysses is Pamela; or, Virtue Rewarded. The novel has some pretty problematic elements by our modern sensibilities, but it was hugely popular upon its original publication. It tells the story of a servant girl who ends up falling in love with her employer, so perhaps there is some symbolism there).

As has happened many times before, Lord John swoops in to clean up everyone’s mess. It’s determined that Lord John will take Ulysses back to London with him, where slavery is unenforceable and Ulysses will be an ocean away from this entire mess. Does this mean we will see more of Colin McFarlane in a possible Lord John spinoff? One can only hope. In any case, Lord John is also embarking on a homecoming. 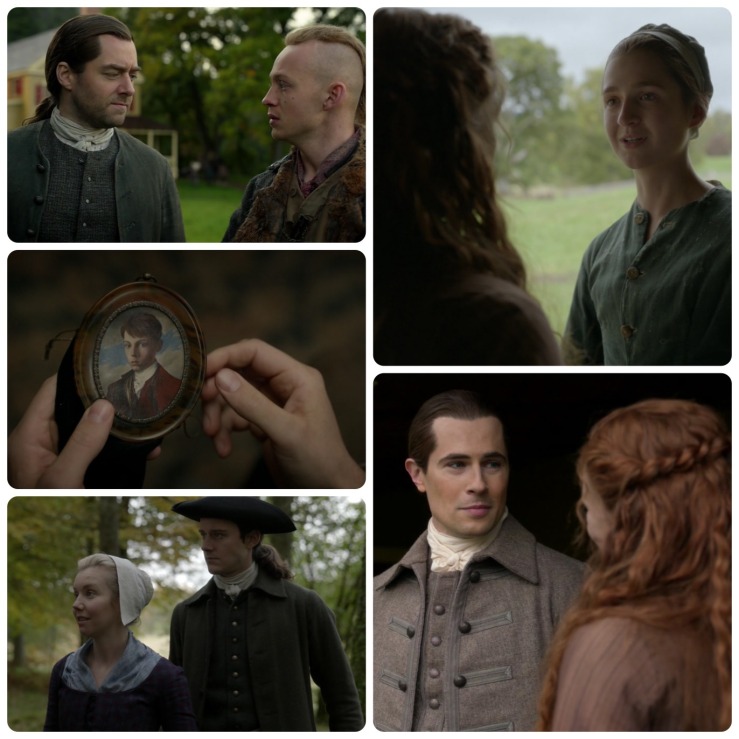 There are many goodbyes in this episode, each one a nostalgic mix of joy and sorrow. As is the case in any century, there is simply never enough time to say all the things we need to say.

“To home,” Jamie toasts before their meal of butter and jelly sandwiches. To remembering this time and place with our loved ones. Nostalgia. Home always exists most sharply in our memories, seemingly ready to conjure at a moment’s notice.

But the thing about our memories is that they are flawed. Nostalgia dictates that we tend to remember an idealized version of our past. For all the discussion in this episode about not being able to change history, the truth is we change it in our minds all the time. What we remember of home is often faulty, prone to romanticism and quixotic in our recall. So where do Brianna and Roger’s memories steer them? Was there a fault in their recall, an error of nostalgia that led them somewhere (or some place) they didn’t anticipate? Who or what do they see on the other side? Where do their thoughts propel them? Can we ever go home again? Such is this episode’s cliffhanger. 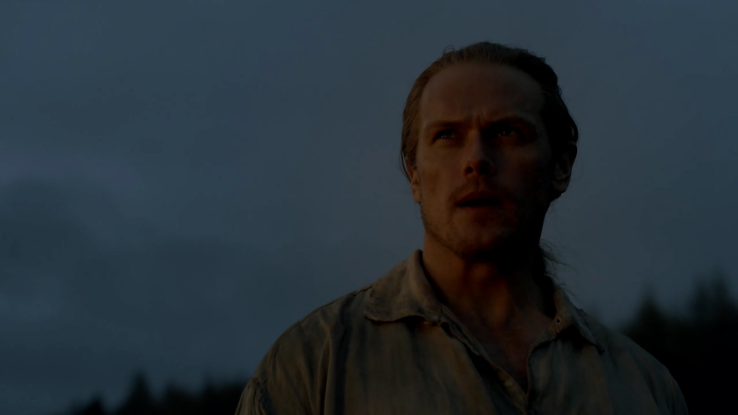 Unsurprisingly, the final moments of this episode center around one character’s dramatic displacement from home. The Brown gang, motivated by Jamie’s rejection and Claire’s efforts to empower Lionel’s wife, kidnap Claire. And so the cross is finally lit, a call to those who love this family to rescue this woman. A call to return to the Ridge…a call for homecoming.