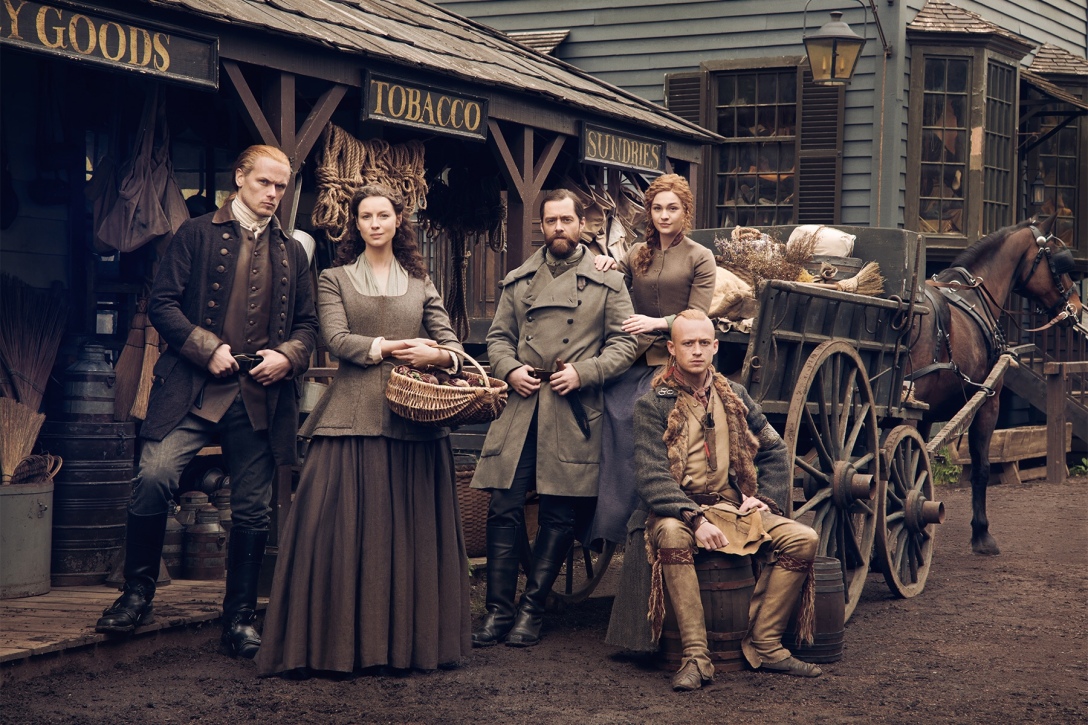 JHRC, what’s it been? Two years?

Okay, let’s do this. Mild spoilers ahead.

We’re down to a matter of hours before this Droughtlander is over, so let’s take a quick whirl around some of these promotional tidbits while we anxiously watch the clock and refresh our STARZ app.

First up, those opening credits:

There’s been a bit of chatter these past few months whether the addition of a male singer signifies some sort of meaning regarding gender dynamics for the upcoming season. To which I say…maybe? But the switch from “lass” to “lad” as it was originally written to me is notable for a potentially different reason: this was originally a song about Charles Stuart and this is the season in which Jamie’s Jacobite past catches up with him…we have Ardsmuir settlers on the Ridge, we know we are going to have an episode featuring Flora MacDonald, and Jamie will find himself thrown yet again into a revolution against the British. I think we can anticipate a few call-backs to Season 3, when Jamie and Claire both dealt with the emotional fallout following Culloden. Notice how Raya Yarbrough still says “lass” when she joins in? Culloden never really left either one of them.

Moving on! Season 6 character portraits, you’re up next. The costumes are divine, the wigs are perfection, and everything looks like it came out of a very niche fall-themed clothing catalogue (in the very best way possible).

I mean, there are all sorts of low-hanging jokes here of the “Save a horse, ride a Highlander” variety. See also: stallion references. But in all seriousness, a stable has always represented “home” for Jamie. Remember how he was most relaxed and himself at Leoch when he was working with the horses? You have to be relatively settled to build yourself a barn that’s this nice, so the setting here tells us he’s laying down some serious, long-term roots.

Speaking of roots. Just as horses remind us of Season 1 Jamie, plants are a reference to Season 1 Claire. Book readers know Claire’s garden also plays a significant role with certain upcoming storylines. Her posture, eye contact, and menswear-inspired vest tells us this woman will save your life and will put up with exactly zero of your crap while she’s doing it.

Listen, Outlander, give me a handsome man staring into middle distance any day. He’s just a bit cleaner, a bit more pressed, a bit more formal than anyone else in these portraits. He’s ready for a new calling, and he’s taking it seriously.

Look closely at those papers…Architect/Engineer Brianna, ready to conquer the colonies. Her positioning in front of a well, an engineered tool, is likely deliberate. Sleeves rolled up, another menswear-inspired vest, a determined look in her eyes…don’t mess with this Harvard/Radcliffe educated badass.

Everything about this photo is quite beautiful. He’s the only character set away from any signifiers of the Ridge…no buildings, no gardens, just Ian and the land to which he feels he belongs.

This looks so good, doesn’t it? I’m not going to do a scene-by-scene breakdown because I think several people have done that already. But I’ll opine that Outlander does its best work when it makes us feel the conflict between the past, present, and future…when it leans a bit more into the time-travel uniqueness of this story. And that’s exactly what we see here…characters who know exactly how things will turn out (Claire, Brianna, and Roger), characters who very accurately see the future as it is being created (Ian), characters who try but cannot escape their past and must deal with the present (Jamie), and characters who cannot leave the past behind (Tom Christie, et al).

Okay, I’ll see everyone back here this weekend. Get some rest, clear your schedules, and enjoy the premiere.