Welcome back! I’m counting down the top Outlander moments thus far. If you missed Part One you can read it here.

Moving on to our next twenty-five! It’s all super subjective and just for fun so let me know what you think.

For me this is the first episode where we see Jamie as a true leader of men. Gone is the boy who made out with Laoghaire in the alcove. Instead, here is a man leading an army on the eve of war. This is the Jamie we come to know (and love) from the novels.

74. Claire and Murtagh take their show on the road (Episode 114: The Search) 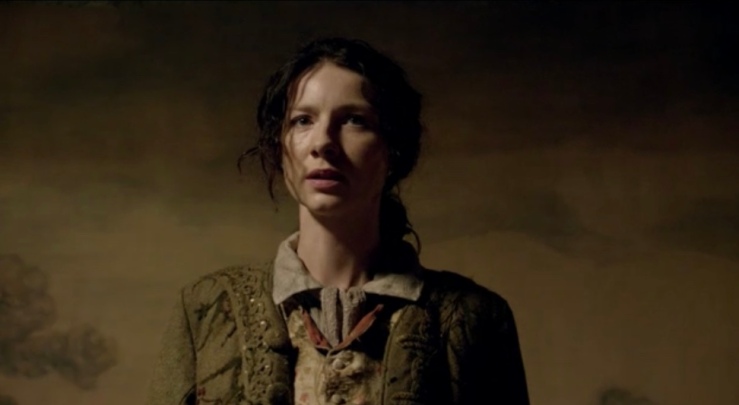 This episode was a necessary bit of levity before the brutal emotional onslaught of Wentworth Prison. It doesn’t rank high in my list of favorites, but I loved seeing Claire and Murtagh bond through their shared love of Jamie…and an appreciation for vaudeville.

Second verse, same as the first! The voice, the red leg, the realization that our favorite political zealot is baaaaaack. It’s one of those scenes where I genuinely wished I had not already read the novels— this would have been a wonderful surprise for those not expecting it. I’m admittedly cheating here, since this incorporates a ton of events, namely Rupert’s execution and Lord Melton sparing Jamie’s life. Rupert’s pride and humor up until the very end is symbolic of the Highlander spirit and moved me to tears. And we all knew Jamie was going to survive, but the actors and writers did a great job of building the suspense. Meanwhile, in 1948…

71. Claire returns to the twentieth century (Episode 201: Through a Glass, Darkly)

The meaning of this episode’s title, taken from biblical verse, says it all: often we cannot see life and its purpose clearly as it is happening. We are looking through a glass (life) but it is dark (grief); we can perhaps only learn the meaning or purpose of these dark times with the passage of time. In Claire’s case, two hundred years has passed in a matter of seconds, and it will take several more years for her to find peace.

Side note: I know it probably wasn’t meant to be a humorous moment, but the random man driving along to provide accurate historical trivia always makes me laugh. I offer my preemptive apologies to any time travelers I may meet in the future; I doubt I will do so well.

Outlander never shies away from accurate representations of pregnancy, labor, and the post-partum experience. Claire is no doctor at this point and her prior nursing experience probably didn’t fully prepare her for this— opportunities for a combat nurse to act as a midwife were likely slim to non-existent. Still, she quite literally rolls up her sleeves to help her new sister-in-law. Jenny’s admission that she’s afraid to die in childbirth is both realistic and relatable. It’s one of the bravest experiences a woman can have and Outlander did it justice. This was quite the party, wasn’t it? All the Ghosts of the Frasers’ Past come to haunt them at this random soirée in colonial Jamaica. Jamie sees John, Claire sees Geillis, Margaret sees the Brahan prophecy, Jamie and Claire see each other naked (via some very impressive eye banging- see photo above).

I’m already taking notes for my holiday gatherings. Related: if you get an invite to my family’s Thanksgiving, please bring a sapphire…and Jamie Fraser.

Just your typical family reunion! Your husband accuses your new sister-in-law of whoring herself out to the English. She, in turn, calls you a tramp. Good stuff! Fraser fireworks are the stuff of legend and I have a feeling we will see more of them in a Season 4. Classic MacKenzie Machiavellianess, even in death. Did you honestly think he would let Dougal have the satisfaction of repentance? Also gotta love the way Claire randomly carries around vials of poison for such an occasion. Question: do we think she had it for use on herself or Jamie if things got really bad in the events surrounding Culloden? Related question: where do we think Claire got this yellow jasmine, considering it’s not native to Europe? Such things I ponder.

Regardless, Colum’s death is metaphorical for the concurrent demise of the Highland culture. The laird, the language, the people…they all meet their end with Culloden. Our emotions are meant to match Claire’s as Randall recounts in his disturbing monologue the “masterpiece” he and Jamie create during this scene. We listen and watch in horror and grief as we slowly realize the pure evil of this man. Kudos to all actors here for one of the most moving scenes of the series to date.

I’m cheating again, as this is technically two separate events, but they both represent leaps of faith and journeys taken by Claire. She is alone and her determination to survive is matched by her determination to save Jamie. She has left a relatively sterile life (figuratively and literally, considering she was a surgeon) behind in the twentieth century to brave bugs, snakes, and crazy priests…all in the name of love. ”I’m fascinated by things not of this time.” Gee, to what or whom could he be referring? There is definitely more to Master Raymond than meets the eye on his embroidered vest (see what I did there?) A cool collection of fossils, an expansive knowledge of medicinals and poisons, an unfazed attitude toward Claire’s many accidental anachronisms…he’s one of my favorite characters and I have a feeling (a hope, really) we might see him again in Diana’s last two novels.

In this scene he leaves Claire (and us) completely nonplussed as he accurately predicts she will someday see Frank again. The bones don’t lie.

63. The Duke of Sandringham loses his head (Episode 211: Vengeance is Mine) When I think of Murtagh decapitating the manipulative and exhausting Duke of Sandringham I always remember Frank and Reverend Wakefield calmly discussing Jacobite history in the manse…the disconnect between the dry speculations of the academic historian and the violent, messy actions of those actually living the history makes for a bit of irony. In any case, Murtagh is always there to say and do the things everyone else wishes they could do.

Mary Hawkins gets an honorable mention for this scene, which overall was really phenomenal. Finally working up the bravery and outrage to stab her rapist nearly earned her a spot on this list. Well done, Mary.

Helpless against history, Claire does perhaps what most of us can only do in the face of injustice and evil: she helps just one person. And sometimes that’s how the world changes…one person at a time. 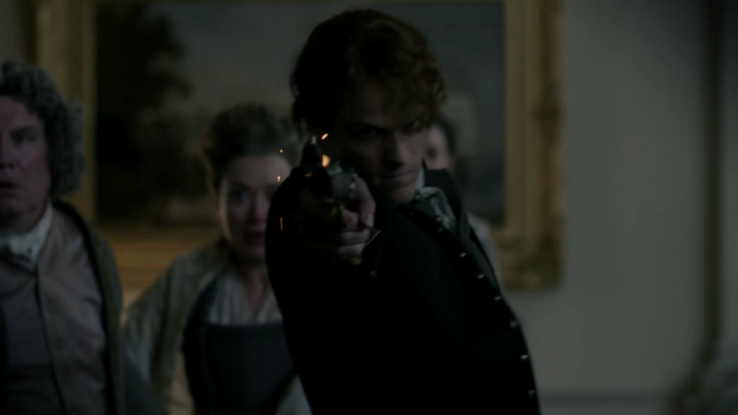 The circumstances of William’s birth are are not ideal, to say the least. Regardless, Jamie meeting his son- the only child of his he has ever had a chance to meet- was a truly moving moment. Sam Heughan played everything about this scene so well- from the heightened tension where a deranged man is holding Jamie’s newborn son, to his steady demeanor as he tries to talk everyone down from the proverbial ledge, and finally to the beautiful way he looks at William when he is at last safe.

p.s. If anyone knows the trick to get a newborn infant to sleep through shouting, a gun shot, and being dropped, please let me know.

The symbolism here isn’t very subtle but it’s still quite poignant. Like Claire, the dragonfly in amber is trapped in time— they’re both anachronisms that journey through the centuries. Perhaps the fossilized dragonfly also represents life and love, becoming more beautiful with time.

Variola major, also known as the smallpox virus, plays a fairly significant role in the Outlander universe. From outbreaks (real or otherwise) in France, to vaccination scars masquerading as marks of the devil, smallpox is a surprisingly effective plot device in the canon. Like the ill-fated dinner party, it seems dubious that a localized smallpox outbreak would derail the entire Jacobite revolution, but our gang gets points for at least trying. Jamie serving as the guinea pig for this little experiment provided a nice moment of comedic relief.

Real men can fight wars and track their partner’s menstrual cycle. This was a surprisingly sweet way to reveal Claire’s second pregnancy and I’m glad the show left this bit from the novels unchanged. Major kudos to Diana Gabaldon for creating such an observant and thoughtful male character in Jamie Fraser. Oh, how I really loved this sequence. The swelling musical score surges in and Claire, realizing she’s finally near Craigh na Dun, makes a run for the standing stones. Do she and Frank hear each other across the centuries or is it the wind (or their imagination)? What might have happened if she had made it back, if not pulled from the portal at the last minute? It was beautiful, heartbreaking, and bittersweet.

Speaking of heartbreaking…this scene completely crushed me. The way Louise gently steps in to help Claire over that threshold of grief was beautifully acted by Claire Sermonne and Caitriona Balfe. Louise is frivolous at times, but there is no doubt this is what true friendship looks like. Why Caitriona Balfe didn’t win an Emmy for this episode is a mystery for our time.

Sometimes acceptance of loss comes in the form of a freezing, open ocean swim to a deserted island. Here is a man with nothing left to lose, hanging on to the thinnest slivers of hope. Jamie obviously doesn’t find Claire, but he returns to land willing to face the future.

Besides Jamie, Claire arguably received the best welcome back to the eighteenth century from Fergus. He embraced Claire’s return with pure joy and without judgement. Also, what a delightful and unsurprising development to see that Fergus grew up to be César Domboy. I sort of love that Brianna, arguably the most pragmatic character in the series, is the one person who doesn’t immediately believe Claire’s crazy story. If my own mother were to tell me such a thing I might gently steer her toward some sort of medical professional. But with confession comes reconciliation, and Claire’s admission sets this family back on the road toward reunion. Teenagers, amirite? You step out for a piss and they try to kill you. Saving LJG’s life here was arguably the best decision Jamie ever made. The debt of honor incured here proved beneficial time and again during Jamie’s life. For example… 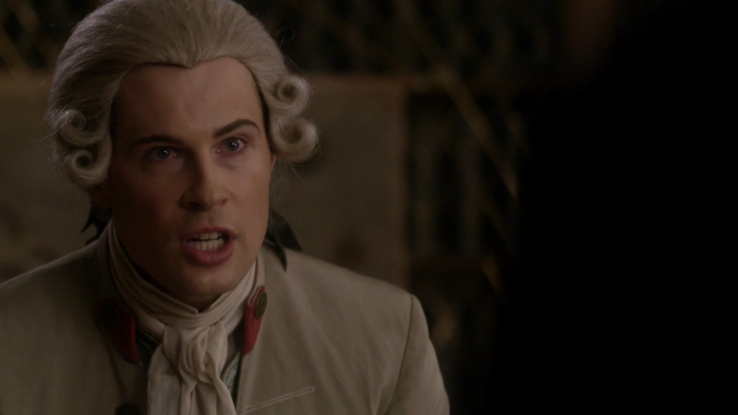 Jesus H. Roosevelt Christ, that kid grew into a gorgeous man. Has there ever been a sexier display of legal and military knowledge? This was such a great scene and so well done by David Berry. There are at least a thousand reasons why I love Outlander, not least of which is the unapologetic intelligence of the main characters. Smart is sexy, don’t ever let anyone tell you otherwise.

In the end this plays out like one of Jamie and John’s chess games: I save your life, you save mine. Check, mate. And there I leave you until next time. Stay tuned…Dougal, Laoghaire, and beach running in the next chapter.

p.s. I recently had the extreme pleasure of discussing this blog with Roma Sars over at My Outlander Friends. She is such a supportive member of our fandom- check out her site.