Warning- Contains spoilers from Outlander Episode 413: Man of Worth

You can’t know where you’re going until you know where you’ve been. It’s true for our characters this season and, if you’re American, it’s true for us viewers as well. Because while this season has been a complicated (but rewarding) journey of faith, family, and love, it’s also been a poignant exploration of America’s beginnings as a country.

As Jamie and Claire discovered at the start of this season, America isn’t easy. The land is beautiful but dangerous. The immigrant experience, then and now, is difficult. We carry the troubling history of slavery and Native American mistreatment. These are some uncomfortable truths.

Uncomfortable truths abound this hour, from Otter Tooth’s warnings to the Mohawk, to Murtagh and Jocasta baldly laying out each other’s weaknesses, to Jamie and Claire telling Roger about Brianna’s rape and pregnancy.

What we do with uncomfortable truths is important; we can either bury those disconcerting feelings, or we can accept and learn from them. As Americans, we look back at where we’ve been to understand where we are going as a nation. As Murtagh tells Jocasta, some things are worth the fight. America is worth the fight. Our characters face similar challenges of moral strength, both in this hour and during this season as a whole. The premiere found our characters struggling with their place in this new world. By the end of the finale, they are united, improved, and whole– accepting of their pasts and looking toward the future. Family, love, and freedom…those things are worth the fight, too.

Acceptance, ultimately, is what unites everyone in this season’s finale. Whether it’s realizing that your people’s way of life is in danger…

…or being adopted (and accepted) by a different culture…

…all our characters experience acceptance. It’s the final phase of any emotional journey, and it’s the closing chapter for this season as well. Childbirth, love, friendship, America…they’re all messy. We accept life for what it is, flaws included.

The one person who does not and cannot accept the world as he knows it is Otter Tooth, and that’s where we begin this episode. For simplicity, I’m going to break down this recap by the two main storylines: Jamie, Claire, and Ian in Mohawk territory, and everyone else at River Run. It’s a long episode with many scenes, so this analysis is a bit longer than usual. Thanks in advance for reading. So much is said visually in this brief title card: we can immediately deduce the time (mid-to-late 1960s based on the woman’s clothing), the identity of the man (the opal-wearing ghost from The False Bride), and why he is triggered (the racism and misrepresentation of Cowboys and Indians). For the young children playing it’s innocent fun; for this man it represents centuries of oppression.

In the eighteenth century, the Frasers cautiously descend upon Shadow Lake and indicate that they mean peace, are willing to trade, and are seeking the whereabouts of their lost man. All seems tenuously optimistic until the sighting of Claire’s opal necklace gets them immediately (and mysteriously) rejected.

Later that evening a group of Mohawk, led by Wahkattiosta, ambushes the Fraser’s camp and demands possession of the opal. A brief but tense stand-off ensues before a trade is reached: the opal for Roger. But not before the story of the gemstone- and Otter Tooth- is told.

A few generations ago Otter Tooth came to the Mohawk, warning them of their eventual demise. He encouraged war against white colonists and disrupted the internal and external peace of the tribe. The Mohawk banished the man, then decapitated him in attempt to permanently silence his voice. Despite the passing years, Otter Tooth’s words continue to haunt their people.

(Side note: The Ancient Greek believed that opals bestowed the gift of prophecy, which is certainly fitting here) There have always been, and always will be, “Otter Tooths” in every society. We have them today. These are the voices that speak uncomfortable truths…words that are often ignored despite their importance. We don’t always like what they have to say, but we need to hear it nonetheless.

These people test us as a society; it might feel better to dismiss them and the nagging fears they create, but we do so at our peril. We can banish or silence such people, but their voices creep into our consciousness. Eventually we might accept what they are telling us, but it is often too late. We are haunted by their words…and by our own inaction. 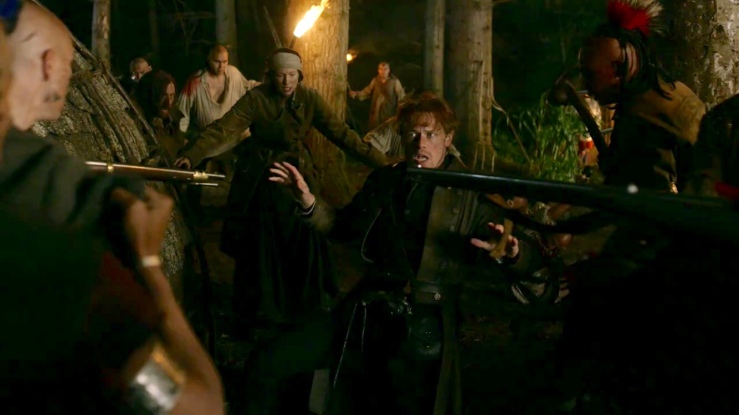 Wahkattiosta knows this, and it’s why she chooses to believe in Otter Tooth’s prophecy. She has accepted his warnings as truth, and thus aims to take back the opal and continue his message. She leads everyone back to the Mohawk village, where they attempt to sneak off with Roger before all hell breaks loose. Ugh…I knew to expect this but it still broke my heart. Again, themes of acceptance. For Jamie, it’s accepting that at some point we have to let people make decisions for themselves. We have to let our children (or foster children) find their own fate. For Ian, it’s realizing that being an adult often means putting the needs of others before our own. Away from the Mohawk, Roger physically and verbally attacks Jamie with several month’s worth of anger. As the three of them hash over the events of the past several months, Claire and Jamie present Roger with the disturbing knowledge of Brianna’s rape. Upon giving Roger the news that Brianna is pregnant (and the child may not be his), they pose to him: Can you accept that? Can you accept these uncomfortable truths?

Back in North Carolina, Brianna is in the last weeks of her pregnancy, agitated and anxious. She wants things to be picture perfect, both literally and figuratively:

Roger’s absence, her family’s unknown whereabouts, and her presence in a different century than her own is…less than ideal at this stage of her life. But what she does have (and perhaps doesn’t fully recognize) is quite a lot: her health, an uncomplicated pregnancy, knowledge that she has unconditional love from her parents. Sometimes it takes an objective eye (in this case Phaedre) to show us how to accept imperfect beauty.

Brianna confides to Murtagh that seeing Bonnet gave her enough peace to move on. Moreover, she has already forgiven Jamie. She is accepting of the ugliness of her past, always remembering while moving forward.

Meanwhile, Murtagh poses questions of morality to Jocasta. He justifies the actions of the Regulators, and tries to convince Jocasta that she could use her influence to their advantage. They exchange some heated words, throwing uncomfortable truths at each other about their respective shortcomings, and it all ends in whisky thrown in Murtagh’s face. Obviously, this is all wrapped up in some pretty heavy sexual tension.

Aw, you guys…this is so wrong but also so right! On paper these two are horrible for each other, and for that reason a few weeks ago I reversed my earlier speculation that this might happen. But of course I should have seen this coming…the fact that they could seemingly never work out makes for some pretty great drama. Sometimes you have to accept love when it presents itself.

By the way, did you catch Jamie’s delicious side-eye later in the episode when he sees them nuzzling:

Reader, I laughed out loud and scared the cat. Jocasta’s demeanor changes after her affair with Murtagh begins. She is much warmer and more open in the episode’s later scenes; she is noticeably empathetic to Brianna’s heartache over Roger. Jocasta is complicated but she is still human, after all. I suspect for the past several years she has been very lonely. There’s likely a reason she’s been married so many times– she dislikes being alone and, deep down, she’s a sucker for love. But, then, who isn’t? Love is a form of acceptance.

Standing ovation to Sophie Skelton for hitting this very realistic labor scene out of the park. Later, upon meeting her son, Brianna’s face is awash in all the complicated emotions a woman feels after giving birth…joy, love, fear, exhaustion…I don’t know how Skelton got to that place as an actor, not being a parent herself, but it was magnificent. And becoming a parent is the ultimate test of acceptance. Life is never the same. We accept our children for who they are and the love that they give us. Jamie and Claire arrive back at River Run, and Brianna’s disappointment at Roger’s absence is heartbreakingly palpable. But, buoyed by the love and support of her parents, she knows she can keeping moving forward. Acceptance.

But soft, what light through yonder window breaks? 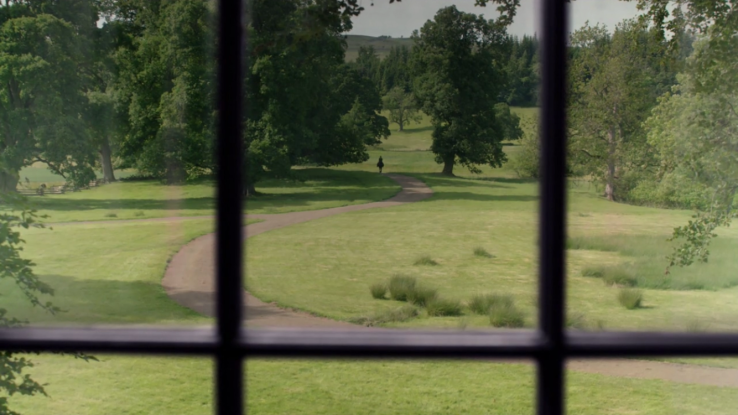 It’s not a white horse but it is her prince. I might be mixing up my literary references here, but you catch my drift.

“Take me to see my son.” So much is wrapped up in those few words: apology, love, understanding and, yes, acceptance. Lest we get too comfortable, we are reminded that this family is never out of harm’s reach for too long. What fun would that be? Redcoats barge into River Run, delivering a message for Jamie from Governor Tryon: form a militia and stop the Regulators, beginning with Murtagh. Such a cliffhanger! Never to fear…I’m sure they’ll figure out something. Will it be hard? Undoubtedly. But the good things in life are worth fighting for.

We end this season where we started: with beginnings. New identities, the birth of a baby, the kindling of a revolution, and the renewal of love and family.

Cuimhnich, Jamie tells Ian as he says goodbye. Remember. Remember who you are in this new life, in this new world. Let us, as Americans, also remember our history. Like Otter Tooth, let us never be afraid to speak those uncomfortable truths. Acceptance, love, and change…such is the American way.

Thank you, everyone, for following along with me this season! I’ll be posting every other week or so during Droughtlander with some character profiles, retrospective recaps, interviews, and thought pieces. If Bees comes out this year I have tentative plans for a read-along. Follow me on Facebook or Twitter (@realoutcandour). I can’t wait to continue the conversation!