Hello, hello! Just under one hundred days until the Season 5 premiere, so how about a retrospective recap to tide us over?

This episode was essentially the Season 1, Part 1 finale and it remains one of my favorites. Most obviously, the title of the episode refers to the two sides we see of the standing stones in the eighteenth and the twentieth centuries. Additionally, we also get Frank’s perspective and other characters (Reverend Wakefield, Mrs. Graham, and the Inverness police) offer their “sides” of the story as they see it.

But the title is probably also a nod to the Joni Mitchell song of the same name, in which Mitchell admits that she doesn’t really know the world the way she thought she did– what she believed to be the truth was only an illusion:

I’ve looked at love from both sides now

From give and take and still somehow

It’s love’s illusions that I recall

Really don’t know love at all

I’ve looked at life from both sides now

From win and lose and still somehow

I really don’t know life at all

You might recognize the song as recently used in the film Love, Actually, in which Emma Thompson’s character is forced to reevaluate her marriage after discovering her husband’s infidelity. What she thought she knew as truth was only an illusion.

And so it is with our characters in this episode– their worlds are upended as they come to grasps with their new realities. For Frank, he thought he knew his wife but she ran away. For Claire, she thought she understood marriage but her love for Jamie is something new. For Jamie, he thought he knew his life but passion renders it a new world. They’ve all seen both sides now, and what they thought they knew before was perhaps just a misconception.

Everyone is taken unawares this hour, both emotionally and physically. For just as everyone is figuratively ambushed by their emotions so, too, are they ambushed by those who would do them harm. From the thieves who attack the rent party as they camp…

…to the redcoat deserters who threaten Claire and Jamie…

…to the men and woman who deceive Frank… …ambushes abound and everyone is left scrambling to piece together answers in a world they no longer recognize. Good and evil, friend and enemy, truth and lies...I’ve looked at life from both sides now.

The first surprise of this episode actually comes to us viewers, as we are unexpectedly jolted into the twentieth century with the ringing of a telephone. Into the Inverness police station walks one Frank Randall– broken, confused, and angry. 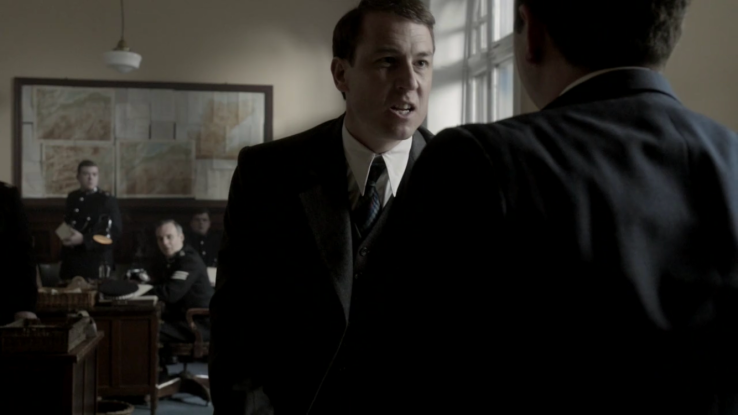 We get the impression that Frank has been annoyingly persistent for the past seven weeks (as would be expected), and the officers have basically had it with this seemingly pedantic man who can’t accept the obvious. Detective Collins essentially gives Frank the Occam’s razor run-down: the simplest explanation is that Claire ran off with another man, so that’s the theory with which they’re sticking. 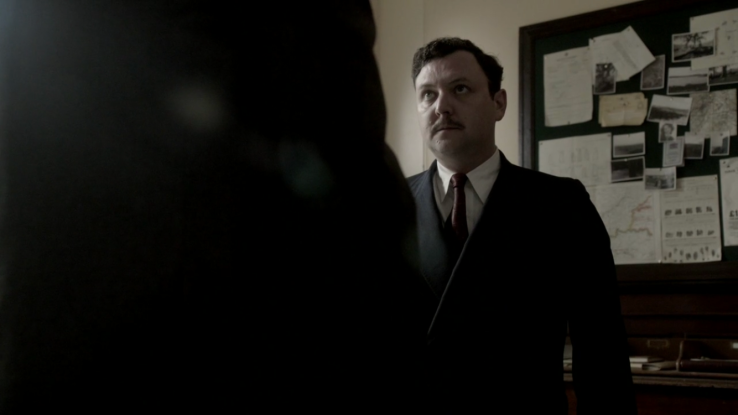 Very subtle class differences are shown here with costuming; classism undoubtedly underscores the tension and emotions of this scene. Frank is wearing a relatively posh three piece suit, while Detective Collins is wearing a suit just a bit less tailored and polished looking.

But get a load of those informational posters, eh? They’re pretty impressive. Here’s Claire’s:

Alright, let’s analyze this sucker. First, £1500 in 1945 was a sizable chunk of change— equivalent to about £62,000 or $80,000 in today’s currency, adjusted for inflation. Combined with the reward money for information regarding the “Highlander’s” whereabouts, it may very well represent the mortgage to Frank and Claire’s home.

Second, it’s a very cute photo of Claire and I’m sure she would be pleased knowing Frank picked out a flattering picture. Also, it is impressively detailed regarding what she was wearing: “a white dress with a mid-grey tartan shawl and brown shoes.” Frank wins all the husband points for this poster, as I’m fairly certain my husband would struggle to name what I left the house in today (Um, yoga pants maybe? A shirt? Probably a North Face hoodie? Perhaps it is a lesson for me to wear more memorable clothes?) 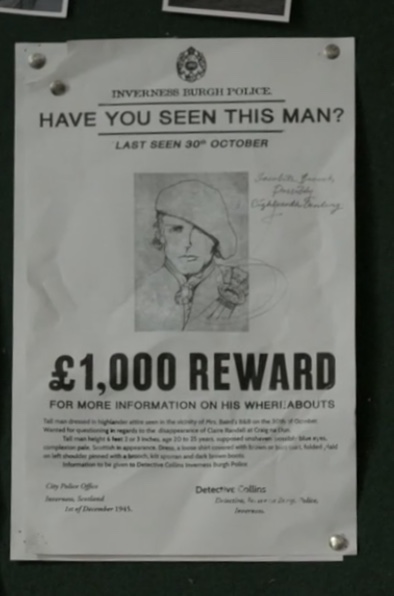 Kudos to Frank for this poster as well, because it is also extremely detailed for a description of a ghost that Frank saw in the middle of a dark rainstorm for less than ten seconds: “six foot 2 or 3, 20-25 years old, blue eyes probable, wearing Jacobite jewelry, looks Scottish.” That last one cracks me up.

So, three cheers to Frank for his keen eye. He didn’t work (doesn’t work? That’s a conspiracy theory for another day) in British Intelligence for nothing.

In the eighteenth century it’s a not-so-lovely day for a picnic but these two don’t care.

“Is this usual? What it is between us, when I touch you, when you lie with me? Is it always so between a man and a woman?”

No, it is not. And that’s the first of many realizations for Claire in this episode. This marriage isn’t usual and upends what she thought she knew before.

Hugh Munro pays a visit and bequeaths a marriage gift to Claire- the eponymous dragonfly in amber…a being trapped in time, carried across the centuries. Symbolic, yes?

He imparts some important information to Jamie: a redcoat deserter by the name of Horrocks is willing to testify on Jamie’s behalf, thereby clearing Jamie of the charges on his head. Back (forward?) in 1945, the Wakefield manse is proving to be quite useful in its first role as Mystery Solving Base Camp. Little wee Roger is sneaking biscuits and taking notes on how to do this in twenty years. 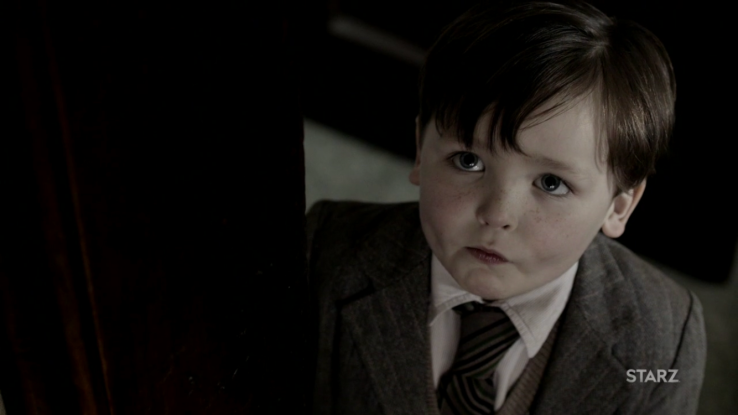 Reverend Wakefield and Frank have put together quite the impressive evidence board, but not nearly impressive as the one that will occupy this house in 1968:

Just an aside that wee Roger is an adorable noodle and I want to pinch his cheeks.

Frank goes out to drink away his ever-expanding grief and is approached by mystery woman Sally who claims to have answers. Now, Frank is a spy and likely suspects all sorts of dubiousness here (which is why he later shows up to meet her exactly on time, and not early with eagerness), but he is a man desperately clinging to a precipice.

Sally and her accomplices do not know with whom they are dealing; they ambush Frank and he very quickly handles the situation…too well. Consumed by fear and rage, he very nearly murders the woman.

Frank’s confession with Reverend Wakefield following this event again ties into the episode’s theme…Frank thought he knew himself as a good man, but that was perhaps a lie. He has seen both sides himself now: the good and the evil.

Meanwhile, everyone decides Claire needs to learn how to defend herself and we are treated to a very amusing scene in which Angus proves himself a surprisingly excellent teacher. If you’ll indulge me, it’s a side of Angus we haven’t seen before.

The lesson can’t come soon enough, for almost immediately afterward Claire has the unfortunate opportunity to put her new knowledge to work. She and Jamie are attacked by two British deserters and Claire manages to kill the man attempting to rape her. She is thrown into shock as she tries to grasp her trauma and process her actions.

Again, it’s a side of Claire that she likely didn’t know existed. She served in a war, but she probably didn’t ever see herself as a person capable of killing. As we hear in her narration, she also likely never saw herself as the type to betray her marriage to Frank. She thought she was one type of person but maybe it was all a lie. She’s seen both sides now.

Back in the future, Mrs. Graham finally gets the chance to tell Frank her theory regarding Claire’s disappearance: that Claire accidentally fell through the standing stones, pierced the space-time continuum, and may be living in a different century.

And even though we know this to be the truth, this theory sounds so incredibly insane to Frank that it’s the impetus he needs to start moving on. He’s done entertaining thoughts of the impossible…he’s returning to a side of him that is most familiar: the pragmatic.

Frank’s feelings parallel Claire’s in the next scene, as she also attempts to make her way back to what is known. Jamie leaves Claire with Willie as he and the others attempt to make contact with Horrocks. Claire, pretty understandably, is miffed at being left behind on the heels of her trauma. More accurately, though, she’s mad at herself for falling in love with Jamie.

Lost in self-flagellation, Claire looks up to realize she is standing within distance of Craigh na Dun. Back in the twentieth century, Frank also finds himself at the standing stones taking one last look…looking for something- anything- to keep his hope alive. Cue one of my favorite sequences ever of the series, in which Frank and Claire run up to Craigh na Dun, their voices carrying in the wind, through the stones, and through the centuries. It’s a scene full of tension, as both characters are hoping more than anything to just return to their lives as they knew them. Trying, impossibly, to go back to the way things were– before they saw both sides.

In the duplicity of time that exists in Outlander, it’s both a matter of centuries and a matter of seconds that interferes with Claire’s return. She is caught by soldiers and hauled off to Fort William to be interrogated by Black Jack Randall. Like Frank in this episode, Claire reaches a point of desperation and she decides to play her last ace in the hole. She throws the Duke of Sandringham’s name out there, hoping to throw Randall of his game enough to score an advantage.

It…does not work. Claire, as in the novels, is fairly inept at lying. Randall finds the holes in her story and begins an attempt at battery and rape. Here is a man who presents yet another revelation– we might have understood evil, but we have never understood it fully until we see a character like Black Jack Randall. In regards to immorality, we have seen both sides now. 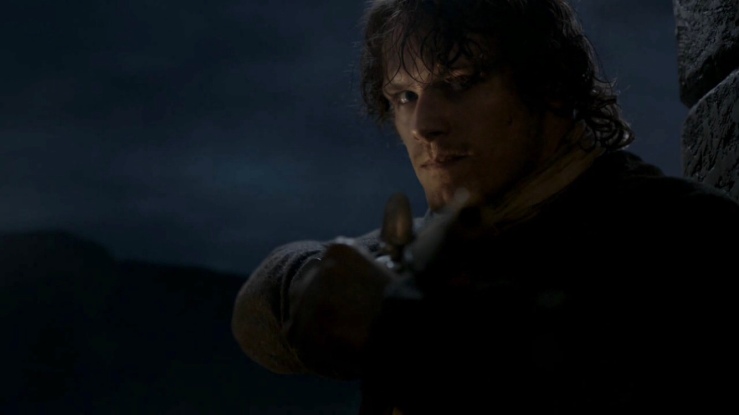 Here is our hero moment, a foil to that immorality: I’ll thank ye to take your hands off my wife

In the words of Sherlock Holmes, as quoted by Reverend Wakefield, when you eliminate the impossible the improbable remains as the truth. It is improbable that a man would attempt such a rescue, but Jamie is a sort of truth. We might have thought we knew what men were before, but we’ve never known a man like this. We’ve seen both sides now.